Greetings to the Hamburg Conference 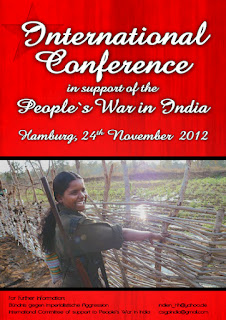 Tomorrow is the opening day of the International Conference in Support of the Peoples War in India in Hamburg Germany. We express our wholehearted and enthusiastic support for its mission of coordinating and developing the international support for the revolutionary process developing in India under the leadership of the CPI (Maoist).

It is necessary both to develop a broad democratic front of public opinion against the counter-revolutionary war of the Indian state and to uphold the Peoples War in India as a model for the construction of proletarian counter-power worldwide. The only ultimately effective form of solidarity to the developing revolutionary movement in India is the organization of Maoist parties to lead and develop the struggles of the proletariat and popular masses worldwide, to begin the process of accumulation of forces towards the construction of the new state.

There can be no division of labor in which the communists of the oppressed countries organize revolutionary popular power while the communists in the imperialist centers merely propagandize their achievements for the benefit of liberal opinion.

We must organize the lowest and deepest layers of the proletariat in the metropole to seize power, to develop autonomous institutions and to construct a broad front against imperialism in contradiction to the reactionary front of monopoly capital.

It is the obligation of the international communist movement in both the imperialist centers and the oppressed countries to lay the groundwork and accumulate the forces for the merger of all the points of heightened contradiction today into the national and regional fronts of an offensive process of world revolutionary war.