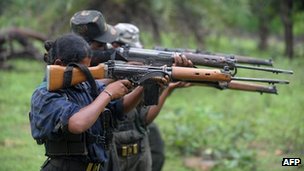 Maoist rebels in India will put an end to their most brutal methods of execution, a senior rebel leader has told the BBC.

Maoist rebels are known to have killed their victims – mostly security forces or civilians suspected to be police informers – using brutal methods.

But rebels say they will now shoot their enemies, rather than hacking people to death or slitting throats.

They say this follows an internal row over the 2009 killing of a policeman.

Francis Induwar was killed by rebels in Jharkhand in 2009 by having his throat slit. His killing sparked off a debate among the rebels, Communist Party of India (Maoist) spokesperson Manas – who uses only one name – told the BBC.

Maoists say they are fighting for the rights of tribal people and the landless poor.

The areas where the Maoists are most active are some of the least developed in the country and in desperate need of infrastructure.

“We have now gradually started to do away with such methods which are considered cruel,” Manas said.

But incidents of brutal executions by rebels continue to be reported from the states of Jharkhand and Chhattisgarh, where the Maoists are most active.

Last week rebels chopped off the hands of two shepherds, whom they suspected to be police informers in Jharkhand.

And on Monday, the rebels hacked a member of an anti-insurgent vigilante group to death in Chhattisgarh.

Police said the rebels left behind a note justifying the killing saying that the man had killed local tribals in 2006.

Manas said he was “not sure” who had carried out the attack on shepherds in Jharkhand since there were a number of splinter rebel groups in the state. He said the rebel leadership was carrying out a probe into the incident.

Earlier this month, rebels belonging to one such group beat to death a couple suspected of living together near the state capital, Ranchi.

Maoist spokesperson Manas said that “usually victims of state atrocities like local tribals or villagers resort to such extreme steps to avenge killings of their near ones by security forces or the state-sponsored vigilante groups”.

“Our armed squad guerrillas have been asked to refrain themselves from being cruel during encounters with security forces or dealing with police informers or for that matter people whom we consider as our class enemies.”

Both the rebels and security forces have been accused of using brutal methods and atrocities in their long-running battle.

“It is good if Maoists are thinking on those lines. They should shun violence and join the mainstream,” Surjit Atri, a senior official said.

This entry was posted in Maoists India and tagged Executions, india, naxals. Bookmark the permalink.