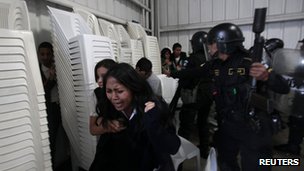 Police in Guatemala cracked down on Monday on protesting education students in unrest that left at least 43 people hurt, including the interior minister.

“Twenty-five people were treated at the scene, while 15 of the wounded were taken to various medical centres. Three police involved in the confrontation were also taken for medical care,” said Sergio Vasquez, spokesman for Guatemala’s volunteer firefighters.

Among the injured was Interior Minister Mauricio Lopez Bonilla, who was treated at the scene by emergency workers, as well as three photographers from local media, who were transported to medical centres.

The incident occurred when a group of education students confronted Del Aguila to reopen a dialogue on reforms that the government intends to implement on the national curriculum.

The minister was arriving at facilities at the Industrial Park at the city’s south end, where classes were being held during the incidents. The school year was interrupted by the education students when they took over schools three weeks ago.

The main reform proposed by the government is extending from three to five years the amount of time that teaching students have to study, which the students oppose.

“All we ask is that we be heard and that our views be considered, and that we make a new proposal that integrates all the teacher’s colleges, not that they try to invite us to a dialogue that ends up being more of a joke,” the students said in a paid ad in the press. – AFP
http://www.iol.co.za/news/world/43-injured-in-guatemala-student-unrest-1.1332972

This entry was posted in resistance and tagged guatemala, repression, riot, social tension. Bookmark the permalink.