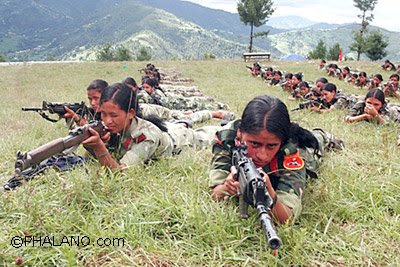 1. The plan of the Party to initiate the people’s war has been implemented. A great process representing the qualitative leap in the development of class struggle in the Nepalese society and in Party life has been initiated. While affecting all classes, stratums and categories of society in an electric motion, the people’s war in Nepal has shaken the “heaven” of the reactionary state and its props and generated new queries and enthusiasm among the masses.

The high morale, exquisite bravery and self-sacrifice demonstrated by the Party and front workers and supporters in the first phase of the initiation of the people’s war, has exposed the cruel, fascist and cowardly character of the reactionary classes and added a new dimension to the glorious tradition of struggle of the Nepalese people. All these have been indelibly engraved in golden letters of the history of revolution in the specificities of the initiation of people’s war in Nepal.

This great initiation and its impact and success is an indicator of victory and glory of the almighty ideology of Marxism-Leninism-Maoism of the world proletariat in general and of the Nepalese proletariat and oppressed masses in particular. In this context, the Party takes pride in all the immortal martyrs who have sacrificed their lives to make the plan of historical initiation of the people’s war a success, pays revolutionary homage to them and resolves to fight till the end to make their dreams come true.

In the history of the Nepalese communist movement beset with metaphysics and idealism, this process has represented the correct implementation of the dialectical materialist theory of knowledge. This has been a scientific and powerful blow to the revisionist proposition of from ‘thought to thought’ and from ‘reform to reform’. Apart from this, not only the positive aspects but the limitations and weaknesses in the organizational, struggle and technical spheres of the Party have naturally cropped up on the surface while making a qualitative leap from the process of peaceful and legal struggle to the armed struggle.

For learning more, this great process has opened a treasure-house of knowledge. This process of learning war through war has been started in practice. Because of a long ideological, political and organizational preparation, the Party has been facing in a normal manner the killing of 17 persons (till March 20, 1996) by the enemy, the condition of having to go underground of more than a thousand leaders and cadres of the Party at a time and the arrest and inhuman torture of hundreds of Party members, members of different front organizations and supporter masses of the people by the enemy. This is a question of not less pride for the Party.

3. This historic initiation of the people’s war has given practical expression to the theory of army as the principal form of organization and war as the principal form of struggle through different forms of armed squads and guerilla actions. Actions during the initiation and the continuation periods were able to put the Maoist people’s war in the centre of national politics of the country. The level, nature and number of armed actions and the level of their propaganda and publicity achieved within a short span of one month should in itself be a unique experience for a Maoist Party of any country in the present day world. In this process, the specificities of the Nepalese revolution, the crisis of the reactionary state and the level of development of the class struggle and the Party have all been manifested simultaneously.

4. One of the main goals specified by the Party in the plan for the historic initiation was to put the politics of armed struggle in the forefront in the country. This goal has been achieved more than ordinarily expected. The politics of armed struggle In Nepal has now been established firmly not only among the general masses of the Nepalese people but to a certain extent at the international level as well. Similarly, the goals of preparing ground for developing certain strategic areas into guerilla zones and of transforming the forms of organization and struggle have also been satisfactorily achieved.

5. The historical initiation of the people’s war has created new problems, contradictions and crises for all the political groups and sub-groups whether inside or outside the reactionary government in the country. This has intensified the crisis brewing within the entire reactionary state. Even the arch reactionary elements could not deny that it is a political issue for fear of their getting exposed before the masses because of the appeal made by the Party to the wide masses of the people along with the analysis of the grave situation of the country at present and because of the level, quality and range of armed actions and propaganda. This process has intensified the contradictions among different reactionary factions within the government and within the factions themselves.

On the basis of their reactions towards the people’s war, it is clearly seen that they are divided into three main political trends. They are: reactionary, centrist and revolutionary trends. Despite the differences of opinion within each group on whether to view the question as a political one or a purely terrorist activity, all in the reactionary camp are unanimous in repressing the people’s war as ‘anti-constitutional’ and ‘anti-democracy’ activity, and the Nepali Congress (NC), the Rastriya Prajatantra Party (RPP) and the Communist Party of Nepal (Unified Marxist-Leninist) (UML) are the main ones in this category.

In this context, the UML clique was seen to be the most upset by the process of the people’s war. The “Bahudaliya Janabadi” (or multi-party democracy) faction of this clique has been particularly aggressive to instigate the government in favor of repression and is conspiring to form its own government and undertake repression.

In the centrist camp fall mainly those small petty-bourgeois reformist groups that talk of Mao Thought and new democratic revolution. These groups are trying to save their existence by hoodwinking the ordinary masses and their cadres with a low theoretical level through their pretension of opposing both the people’s war and the government repression. Despite a quantitative difference, as the basic character of these groups is reformist and parliamentary cretinist, they are hurling the identical accusation of ultra-leftism at the people’s war. This accusation of theirs has become in practice merely an additional voice to the cacophony of the reactionary UML clique. To get carried away by the reactionary propaganda, to have faith in the bourgeois elements and to distrust the proletariat, are their characteristic qualities, which have now been exposed.

To attempt to tread a middle path in the struggle between revolution and counter-revolution is to serve counter-revolution. This truth is getting verified in the context of these cliques. A new opportunity is now at hand to thoroughly expose such opportunist characteristics of theirs and to clear the illusions amongst the genuine revolutionaries in their ranks. What has been seen in real life is that the honest and revolutionary cadres of these groups (particularly the liquidationist ‘Unify Centre’ and the neo-revisionist ‘Mashal’) have been helping the people’s war somehow or the other. Apart from this, wherever and to what extent do these groups take a stand against the reactionaries, there and to that extent, we must pay attention to forge a coordination with them.

Political parties, organizations, independent intellectuals and general masses of the people that have helped and supported in various ways the process of the people’s war led by the Party, constitute the revolutionary camp.

In essence, the great process of the initiation of the people’s war has made a direct and massive impact in the politics of the country and has enhanced the possibilities of utilizing from new heights the contradictions developing in new forms. The Party should be alert in practicing Marxism-Leninism-Maoism on this question

The initiation of the people’s war was historic; but now the grave question of whether we are able or not to continue and defend and develop it, is looming large before the Party. At the moment, the attention of the politically conscious masses, intellectual community and all others is centered on what would be the next plan of the Party and whether or not we would be able to preserve and develop what has been newly given birth to. Only through a serious coordination of the sovereign principle of Marxism-Leninism-Maoism and the experiences of the historic initiation of the people’s war can we formulate a correct future plan of the Party. In this context, we should first of all pay serious attention to the following points:

1. We should constantly keep in mind that despite all the specificities, the character of the people’s war in Nepal is protracted. ln the present condition of the balance of forces, the enemy wants to drag us into a decisive war, but we on our part, want to avoid it and prolong the war. The enemy uses the strategy of attack but we use the strategy of defence. The enemy wants to incite us and draw us into confrontation according to his own convenience, but we want to harass the enemy, tire him out and attack him at his weak points at the time and place of our convenience according to our own plan.

3. We should have a clear understanding that the danger of making wrong policies and programmes in the Party is inherent in the vacillating character of the petty-bourgeois class in Nepal. This class has the tendency of getting overexcited and jumping into adventurism after a minor victory, and the tendency of getting disheartened and moving towards capitulationism after a minor defeat. We must wage relentless ideological and political struggle against the tendency of dragging the Party in the direction of either adventurism or capitulationism. In the present situation of the enemy in the offensive, the capitulationist tendency is more dangerous for the Party.

4. The historical initiation of the people’s war is a rebellion, indeed, of far-reaching consequences, against the existing state and exploitation and oppression since thousands of years. Put in the present stage of socioeconomic formation and development of class struggle in Nepal, this is not an armed insurrection to capture the central state power immediately. The process of protracted people’s war is the process of construction of revolutionary Party, revolutionary struggle, revolutionary power and revolutionary army, from the simple to the complex. In the context of the beginning of such a new and qualitative process through the historic initiation of the people’s war by the Party and the widespread propagation of the politics of armed struggle, it is necessary now to concentrate on the development of guerilla war in a planned way and based on the principle of protracted people’s war and on our own specificities.

“Weapons are an important factor in war, but not the decisive factor: it is people, not things, that are decisive.”
– Mao Tse-tung, “On Protracted War”

Excerpts from a document adopted by the meeting of the Political Bureau of the Central Committee of the Party held In third week of March 1996.