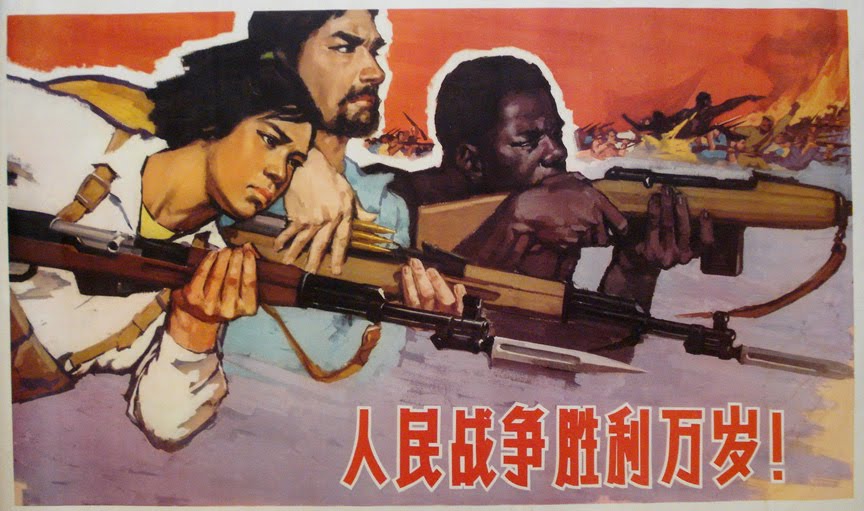 The devastations of imperialist globalisation, wars of aggression and the devastating economic crisis of the imperialist system and its impact on proletarians and the broad masses have awakened worldwide a wave of struggles and revolts.

In this context a potential new wave of the world proletarian revolution develops and emerges, with the people’s wars led by Maoist parties as its reference points and strategic anchor. The realisation of this potential ultimately depends on how successful the Marxist-Leninist-Maoist parties are in fulfilling their revolutionary tasks at national and international level. The pooling of their understanding and experience and the development of their capacity to take a united revolutionary message to the rebellious masses all over the world, have decisive importance. Unfortunately there has been a lag in this matter. This is severely compounded by the crisis in the Revolutionary Internationalist Movement (RIM), which is now defunct.

In this situation steps need to be taken to work for the building of an effective international MLM organization that can aid the fulfilment of revolutionary tasks and take the collective voice of the Maoists to the proletariat and struggling peoples. Therefore, we should move towards holding a new conference of the Marxist-Leninist-Maoist parties and organizations throughout the world. This conference should take up the task of building an international organization based on Marxism-Leninism-Maoism.

It is appropriate that this task should be informed by the positive and negative experiences of RIM, given its experience in building and functioning as an international organisation during its nearly three decades of existence. As part of the work for the conference and the building of an international organization we need a summation worked out by all the parties and organization which has been part of this experience. Here we put forward some preliminary views.

1.
Following Mao Zedong’s death in 1976, the Chinese revisionists seized political power through a military coup d’état, thus causing the Communist Party of China (CPC) to degenerate into a revisionist party––overthrowing proletarian political power, bringing down socialism, and transforming revolutionary China into reactionary China. Moreover, the emergence of the Hoxhaite revisionist line in the Party of Labour of Albania, influenced a certain number of communist parties and organizations throughout the world, and ended up producing a serious assault on the international communist movement.

Despite this context of defeat, some Marxist-Leninist parties and organizations, that did not follow either the Chinese or Hoxhaite variants of revisionism, though few in number, held the first international conference of Marxist-Leninist parties and organizations in 1980 and passed a Joint Communiqué, A Call to the Proletariat and the Oppressed Peoples of the World. Although this conference did not result in the creation of a stable international organization it prepared the ground for a second international conference in 1984.
The formation of the Revolutionary Internationalist Movement (RIM) in this second conference of 1984 was a positive international, theoretical and practical endeavour that responded to the ideological, political and organizational needs and necessities of the international communist movement in the circumstances of a period defined by the crisis that had engulfed the communist movement following the defeat of the Chinese revolution.
The Declaration of the Revolutionary Internationalist Movement that was passed at this conference – on the basis of Marxism-Leninism- Maoism (Mao Zedong Thought as it was then termed) and a principled opposition to the modern Russian and Chinese revisionism (as well as the Hoxhaite dogmato-revisionism) – provided a basic ideological-political framework for the foundation of the movement .

2.
In its past three decades of struggles the Revolutionary Internationalist Movement, since it was based on Marxism-Leninism-Maoism, achieved important theoretical and practical gains that were principled and worthy of further development. The documents passed in the international conferences and the expanded meetings of RIM (like the Declaration of the Revolutionary Internationalist Movement, Long Live Marxism-Leninism-Maoism, and the Millennium Resolution), despite some of their deficiencies and shortcomings, were all important theoretical contributions to the advancement of the Movement, as part of the international communist movement. The internationalist support to the people’s war in Peru and PCP, including the historical campaign in defence of Dr: Abimael Guzman, the contribution and support for the start and continuation of the people’s war in Nepal for its ten years, the publishing of the journal A World To Win in several languages that allowed to make known ideological and political understandings and analysis of the Movement and its parties and organizations in different countries, and statements issued have been notable features of the role played by the RIM in the international communist movement.

3.
The founding conference of the RIM had recognised the necessity of building a new communist international of a new type. To realize this, the Declaration of the RIM correctly identified the twin tasks of evolving ‘a general line and a correct and viable organisational form, conforming to the complex reality of the present-day world and the challenges it poses.

4.
The interim committee – conceived as an embryonic political center – was formed with the task of working for the process of furthering the ideological, political and organisational unity of communists, including the preparation of a draft proposal for a general line for the communist movement. But this task was not fulfilled by the Corim and the RIM could not reach this goal.

5.
In the experience of RIM, the existence of such a center, formed for enabling a consistent and unified role for this Movement has given mixed results. There were some good results. There have also been serious lapses, hegemonic tendencies in functioning that negated the collectiveness that was the RIM, sorely undermined its unity, hindered the incorporation of more MLM parties and thus blocked the fulfilment of the tasks it had set for itself.

The new international organization should have an executive centre, whose internal life and methods correspond to the stage and methods shared by the political parties and forces that give life to this organization. It should function with the competency and commitment to work within the framework of the decisions and agreements of the international organization as decided in its conferences and other meetings. As in all other matters, here too, the consistent defence, application and development of MLM and the fulfilment of their own internationalist tasks and obligations by the individual parties are the ultimate guarantee.
In spite of its positive aspects, our Movement could not fulfil the tasks it had taken up and entered a crisis.

When revisionism of Bob Avakian’s post-MLM ‘new synthesis’ variety became dominant in the Revolutionary Communist Party-USA and of the Prachanda-Bhattarai variety became dominant in the United Communist Party of Nepal (Maoist), not only did these parties deviate from the path of revolution and communism, but the destructive and disparaging effects of their counter-revolutionary lines negatively affected the parties and organizations within RIM, specifically the Committee of RIM (CoRIM), in an extensive and profound manner. These are the immediate ideological sources that have led to the current crisis and collapse of the RIM.

We propose the convening of an international conference in order reactivate and reorganize an international organization. We believe that this task must be jointly taken up with the involvement of the Maoist parties leading people’s wars, and all the Maoist forces, including those outside the RIM, so that the conference will benefit from their views and experiences. In order to achieve this aim a process of ideological, political debate must be carried out.

As part of preparation for the conference and serving its aims, we will it necessary to organise a seminar on ‘Summation of Experiences of RIM, ICML, and other International Initiatives.’
Through this whole process the points of unity and differences can be identified and a relatively advanced platform can be arrived at, to become the basis of a new international unity concretised in a new international organisation. In the current circumstances, the execution of this revolutionary responsibility can demonstrate a practical expression of the internationalist communist slogan, “workers and oppressed peoples of the world unite.” It is this that will allow the MLM communist parties to establish and develop Marxism-Leninism-Maoism, realize a new unity of the international communist movement, place it at the van of worldwide people’s struggles and fully unleash and realize the potential new wave of world revolution.