Deaths in custody spark protests and violence on French estates 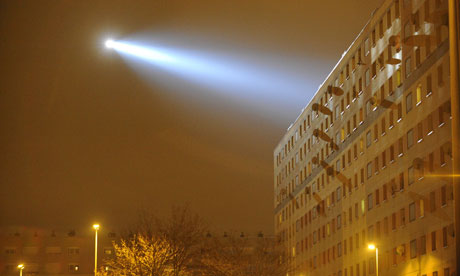 Community leaders have appealed for calm on housing estates outside Paris and in central France after the deaths of two men during police arrests sparked days of protests and car-burning.

Wissam El Yamni, a 30-year-old truck driver, was arrested on an estate in Clermont-Ferrand in central France on New Year’s Eve after police said he was throwing stones at their car. After a chase, El Yamni was brought to the ground by officers and driven to a police cell. He was said to have drunk alcohol and taken drugs. He fell into a coma after suffering heart trouble while being transported to the police station and died on Monday. He had fractures and lesions to his neck.

A preliminary investigation has been opened to determine whether deliberate police violence caused his death. The League of Human Rights and a key trade union has demanded the officers under investigation be immediately suspended. Gangs of youths led several nights of car-burnings and rioting in protest at El Yamni’s death.

One human rights lawyer criticised the “war measure” of saturating the run-down Guathiere housing estate with hundreds of police to contain young men torching cars in protest. Around 700 people gathered for a peaceful vigil on Tuesday as locals appealed for calm.

In a separate incident, a 25-year-old died of a heart-attack on Tuesday night during a police check in the hallway of a towerblock in Aulnay-sous-Bois, one of the northwestern Paris suburbs which saw the worst riots in recent French history in 2005. The state prosecutor opened an investigation saying the death appeared to have been “medical”. Police said the victim had suffered from pre-existing health problems and had been handcuffed without violence. The death sparked an angry spree of car-burning and rioting by youths on Tuesday night.

The poor relationship between police and young people on the ethnically diverse French housing estates, and perceived injustice and brutality, has been at the heart of the recent unrest. In 2005, urban riots across France were triggered by the deaths of two teenagers trying to escape from police in Clichy-sous-Bois, a Paris suburb. In November 2007, the death of two boys in a collision with a police car sparked violence and rioting in the Paris suburb of Villier-le-Bel as youths railed against what they said was widespread police injustice.

In a report in November, Amnesty International highlighted five deaths in police custody in recent years denouncing the “impunity” of some officers and calling for impartial investigations of the cases.
http://www.guardian.co.uk/world/2012/jan/11/protests-violence-french-estates

This entry was posted in resistance and tagged france, repression, riot, social tension. Bookmark the permalink.