Support the Moroccan prisoners of the VDB MLM!-(rough translation of joint statement) 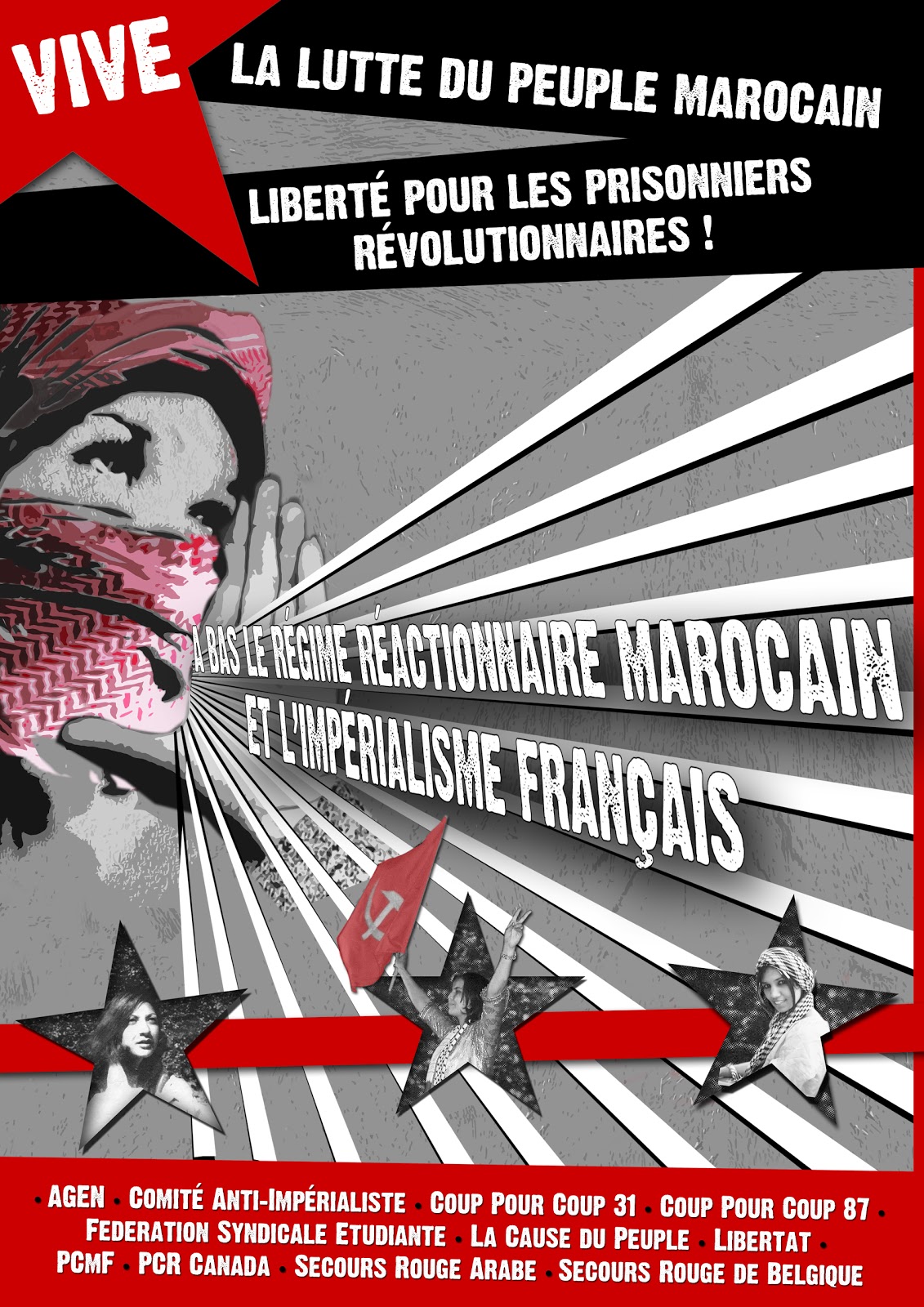 Since 2008, intense struggles have been waged in Morocco to obtain the release of prisoners of the Baseist Democratic Way  MLM (VDB MLM) and other political prisoners. They belong with union workers, the unemployed insurgents (Ifni) and the Sahrawi prisoners as  “internal enemies” punished under the reactionary regime of Morocco. Their courage and determination to serve the interests of the people allowed their struggle beyond the borders of Morocco, despite the media blackout. This struggle resonates throughout the world, it serves as an example for all those who stand against the unjust order of the capitalists, feudal landlords and torturers.

VDB MLM is revolutionary current born in the UNEM (National Union of Students of Morocco) is an heir to the “united front of progressive students” that existed in the 1970s. Its ideology is based on Marxism-Leninism-Maoism. VDB MLM activists were imprisoned because they lead the fight for free education for the son and daughters of the people against the “national charter of education”, against the privatization and militarization of the universities, they defend the rights of the masses which students are mostly part of, they defend internationalist solidarity, especially with occupied Palestine and with the people’s wars. They are locked or have been imprisoned because they are communists.

Others were killed. How can we forget the martyr Abdelrrazak El Agadiri, , member of the UNEM and VDB MLM, murdered December 28, 2008, during a protest in support of the people of Gaza? The regimealso tried to hide his remains out the back door of the hospital Ibn Tufayl. However, his struggle is still alive.
The struggle for the liberation of the  Boudkour Zahra group (imprisoned since May 15, 2008) and for the comrade Ilham Hasnouni (captured at her  home October 12, 2010) has not yet fully accomplished despite the release of these two revolutionary figures and some of their comrades. Hasnouni Ilham succeeding Zahra Boudkour as the youngest political prisoner in Morocco, is a student at the University of Marrakech, 21 years old, a communist activist and trade unionist of the UNEM. Detained for more than ten months without trial, she was arrested without a warrant or prior notice tortured beginning in October 2010 for acts dating back to events on campus in 2008. Similar events were held in Fez in March 2009. Student clashes with the police then led to several waves of arrests. The activists are charged with: destruction of property of the state, participation in an unauthorized rally, humiliation of a public servant in the performance of their functions, use of force and even participation in an armed group.

In November 2011, there are three Baseist revolutionary prisoners languishing in jail:

* Achouini Murad, arrested May 15, 2008, sentenced to four years in prison

* Elhamdiya Youssef, arrested October 10, 2010, sentenced to a year and a half

* Abdelhak Talhaoui, arrested Feb. 23, 2011, sentenced to four years in prison at trial, conviction reduced to 10 months in prison before the appeals court in October 2011.

For the regime, detention is used to break the will of the trade unionists and political activists. But the solidarity movement and the accentuation of class struggle in Morocco have turned prisons into places of resistance and struggle. Eventually the demand for the release of prisoners has grown in the popular movement, it is located on the platform of the “Movement of 20 February.” Morocco is, like South America and the Zionist entity, a center of torture, persecution and elimination of opponents. it keeps this sinister privilege. Marx said that when the bourgeoisie, even the most democratic, is threatened, it tramples on its own legality. Kidnappings, extrajudicial executions, disguised killings of militants  are weapons of terror used in all plans that guarantee the imperialist order. The imperialist countries are the principals even when they are not the direct agents of torture. The struggle for the release of political prisoners is a matter for the  class, an international fight for all those who struggle for the emancipation of the oppressed.

We call for developing initiatives to demand their immediate release while popularizing their fight!

Long live the struggle of the Moroccan people!
Freedom for  the revolutionary prisoners!
Down with the reactionary Moroccan regime and French imperialism!