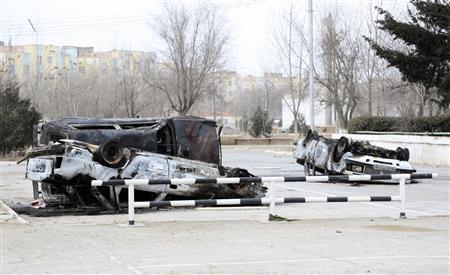 Late Saturday, one person was killed and 11 people were wounded in a fresh clash with police in the village of Shetpe, bringing the total official death toll in the western region to 12 and the number of wounded to nearly 100.

President Nursultan Nazarbayev declared a 20-day state of emergency Saturday in the oil city of Zhanaozen, in the same region, after at least 11 people were killed there in violence that broke out Friday.

Public protests are rare in Kazakhstan, Central Asia’s largest economy and biggest oil producer, where the 71-year-old Nazarbayev has overseen more than $120 billion in foreign investment during more than two decades in power, but tolerates little dissent and puts stability before democratic freedoms.

The Organization for Security and Cooperation in Europe said it was worried by the confirmed death toll and urged the Kazakh authorities to use force proportionately, respect human rights and hold a transparent investigation.

Braving biting frost, they faced a large force of black-clad riot police holding shields, a Reuters correspondent reported from the scene. Some policemen were armed with automatic rifles.

“Take the troops out of Mangistau!” read a long banner in Kazakh held by a dozen protesters.

One protester, Sarsekesh Bairbekov, said he had been fired by oil firm Karazhanbasmunai (KBM) in May. “I worked there for 20 years. I was a welder and lost an eye,” the 58-year-old told Reuters. His wage was 120,000 tenge ($810) before he was fired.

“We want them to take away the troops,” Bairbekov said, referring to the state of emergency imposed in Zhanaozen after the riots. “They killed local people,” he added, still wearing maroon-and-blue KBM overalls.

Many protesters called into question the official death toll announced after the riots in Zhanaozen.

Nurlan Mukhanov, deputy chief doctor at the Mangistau regional hospital in Aktau, said 35 wounded had been brought from Zhanaozen and another three from Shetpe.

“The majority have gunshot wounds,” Mukhanov said. “We should be ready for any situation.”

Most later left but some 50 “hooligans” set the diesel locomotive on fire and moved into the nearby village of Shetpe, setting the New Year tree on fire, smashing shop windows and throwing petrol bombs at police, the statement said.

“Taking into account the fact that the hooligans presented a real threat to the life and health of peaceful citizens and policemen, the latter were forced to use weapons,” it said.

One of the 12 people brought to a local hospital with gunshot wounds died later, the statement said.

“The authorities don’t really know what is happening in their own home,” said Ivan Rabayev, a 74-year-old retired construction worker. “Kazakhs are shooting Kazakhs.”

The riots began Friday when sacked oil workers and sympathizers stormed a stage erected for an Independence Day party and smashed sound equipment in central Zhanaozen, a city of some 90,000 people.

They later set fire to the city hall, the headquarters of a local oil company, a hotel and dozens of other buildings, including trade centers and houses. They also burned cars and buses and plundered cash machines.

The clashes soured national celebrations marking the 20th anniversary of independence from the Soviet Union and unnerved a government focused on stability and economic growth.

Nazarbayev, a former steelworker who has overseen rapid market reforms but tolerates little dissent in his hydrocarbon-rich nation of 16.6 million, declared a state of emergency and a curfew in Zhanaozen until January 5.

Public protests and strikes are banned, while movement around Zhanaozen and access to and from the city is restricted.

State-controlled KazMunaiGas EP, which sacked 989 workers in Zhanaozen after staff went on strike for better pay and conditions in May, said 2,500 people were on strike at the height of the dispute. Representatives of the striking workers have put the maximum number at almost 16,000.

One sacked oilman, who declined to be named, said: “People have been on strike for seven months and the authorities are saying that hooligans and alcoholics are causing this trouble. It’s all lies.”
http://www.reuters.com/article/2011/12/18/us-kazakhstan-clashes-idUSTRE7BH08420111218