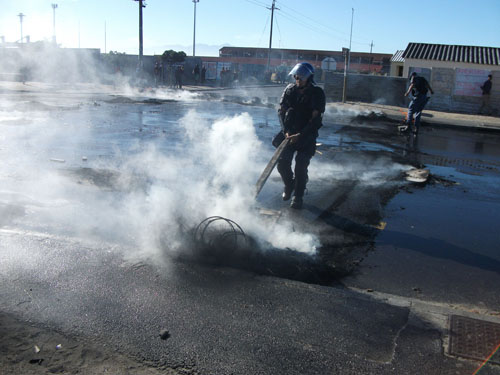 An angry crowd of about 200 residents blocked Pama Road in Khayelitsha Site B with burning tyres, rocks and rubbish yesterday morning in protest against a lack of housing opportunities.

The residents, who came from S-informal settlement disrupted traffic between the major thoroughfare of Lansdowne Road and Pama road from about 4am until police arrived shortly before 5.30am.

Police used a water cannon to disperse the protestors and six people were arrested and charged with public violence.

“I have been living in this place for more than 20 years. The place is not safe, it’s dirty, my house is leaking, there are no toilets, I’m using my bucket to relieve my self. I was once robbed on my way from the stand pipe taps because they far from our homes. Government must build us house I don’t want to die here,” said Protesting resident Nomisile Gawulani, 71.

He said S informal settlement, which had 460 shacks, was over crowded.

“We want the Human Settlement MEC Bonginkosi Madikizela to come and see where we stay. This place is very dirty. We don’t get any service delivery here. The previous ward councillor promised to get us houses but nothing has happened.”

Mpengezi said the community would protest again until they got Madikizela’s attention.

Madikizela’s spokesperson Bruce Oom said the Department was aware of the protest.

However, he said Madikizela was in Brazil this week and would not be able to accommodate the protestors’ demands for him to meet them with the six-hour timeframe they provided.

“The point must be made that the Department supports the right for people to voice their opinions, but does not support any threats of violence in order to make sure demands are met,” said Oom.

Van Wyk said the protestors dispersed peacefully by 8.30 am and no shots were fired but they returned two hours later and again started to burn tyres and throw stones at passing vehicles.

Police then blocked the roads off and used a water cannon and two stun grenades to disperse the protestors.

He said six protestors were arrested and detained at the Lingelethu West police station. “POPS members and Metro Police are monitoring and patrolling the area. The situation is under control.”

City of Cape Town Mayoral Committee member for Human Settlements, Ernest Sonnenberg, said he was aware of the protest and would be attending a community meeting tonight (Tuesday).

Sonnenberg said the S-informal Settlement, which consisted of 565 dwellings, was not identified for current housing projects or formal upgrading but the city would “continue to deliver basic services in the area”.
http://westcapenews.com/?p=3419