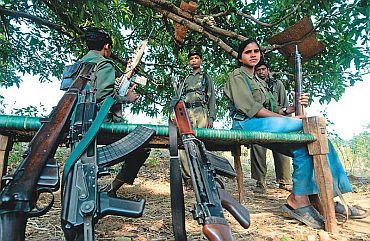 Reports of Maoists mobilising people against dams in Arunachal Pradesh, shortly after Assam Chief Minister Tarun Gogoi had warned about ultra-Left presence in Assam, can only mean that policymakers both in New Delhi and the North-East can no longer ignore the presence of the Reds in the region. The situation in the state is increasingly worrying, especially now that captured Maoist members have reportedly confessed links to elements in the North-East.

Gogoi’s claims were not backed by reports from the ground. All he said was that two officials – one from the Assam Students Youths Organisation (ASYO) and the other from the Assam Chah Janajati Suraksha Samiti (ACJSS) – had been nabbed by security forces in Orissa’s jungles. He did not have any more incriminating information to offer, except to say that these were frontal organisations of the Maoists. Moreover, the timing of this revelation was suspect – it came close on the heels of the tripartite Suspension of Operations being signed by the Union and state governments with the overground faction of the ULFA led by Arabinda Rajkhowa.
There are however plenty of good reasons to believe Gogoi’s contentions. Maoist cadres are supposedly active in some scattered pockets in the state, and the areas believed to be most prone are the tea gardens where the majority population are Adivasis, the third largest multi-ethnic bloc in the state. The people in the tea garden areas hail from the same states in the Indian heartland where the Maoists are active – Jharkhand and Orissa, among others. They are a marginalised ethnic lot. Since 2009, there have been sporadic arrests of Maoist elements in the state, but these were never a cause for worry.

Then there was the reported arrest of nine Maoist cadres in the Lohit district of Arunachal Pradesh. What was surprising is that these men were apprehended in connection with an arms-and-cash loot case that was believed to have been pulled off by ULFA militants. The men were said to be members of the Upper Assam Leading Committee of the Communist Party of India (Maoist), and all hailed from Tinsukia district in Assam. They were mobilising locals against power projects in Arunachal Pradesh.

One swallow, of course, does not make a summer. But, Maoists never drop from the skies, they only fill up a political vacuum and become the face of resistance. The two incidents taken together need not make anyone reach out for the panic button; yet these are warning signals in their own ways. There are a number of reasons why policymakers must heed these seriously.

First, the marginalised Adivasi community in Assam is a potential launch base for Maoists. The few militant Adivasi groups that had sprouted in the area earlier were mostly to offer resistance to ULFA and Bodo militants – they never had an impressionable political agenda. Maoists can strike roots among this community for the same reason that they have in the heartland.

Second, even though the people of Assam have historically not been Left-aligned, there is little doubt that the All-Assam Students Union (AASU), the Asom Gana Parishad (AGP) and the ULFA have failed to redress the grievances of the people. The latter had only piled it up on the same people, they purportedly fought for. Just because they failed and that the people are no more overwhelmingly with them, does not mean that the problems have been solved.

Third, anti-dam activists in spite of their relentless struggle, have failed to stop the construction of new dams in the region. Arunachal Pradesh alone is slated to see more than 80 dams of various sizes in the future. Most of these would be environmentally catastrophic, and have not taken into account the needs and apprehensions of local communities. All successive state governments have remained adamant in their zeal to push for dams. And when moderates fail to deliver the goods, hardliners take over sooner or later. The alleged presence of Maoist cadres in Arunachal Pradesh needs to be seen in this light.

Fourth, all earlier forays into the North-East by Maoists had failed. But this time, in most places they are entering a political vacuum. A majority of the insurgent organisations are either holding talks with the Union or state governments, or have been rendered militarily impotent. True, ethnicity-based insurgencies are slowly dying out in the Northeast; but that does not mean that the fruits of development have reached all and sundry. In fact, precious little has.

Fifth, the CPI (Maoist) does have ties with the ULFA (Baruah), and is said to have established links with the People’s Liberation Army (PLA) and the United National Liberation Front (UNLF) in Manipur. The revolutionary agenda of the Maoists and the secessionist dreams of the North-East militants may not eventually meet, but strategic tie-ups have their own significances.
http://www.firstpost.com/blogs/the-north-east-is-in-danger-of-becoming-the-next-maoist-hub-101558.html