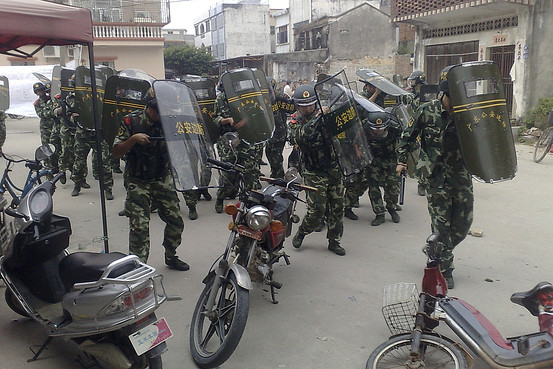 It was the latest in a series of protests sparked by perceived social injustices in Guangdong, known as the workshop of the world for the tens of millions of migrant workers who toil in the province’s factories.

Rioters angered by a government land deal and rumours that police officers had killed a child wrecked vehicles and attacked police at the station in Guangdong’s Lufeng city, local authorities said in a statement.

Unrest first broke out Wednesday among local people but escalated after rumours of the child’s death spread, the statement said. On Friday, further protests were reported in a village nearby.

“On September 22 at around one in the afternoon, some villagers who had ulterior motives spread rumours about police killing a child, inciting some of the villagers to storm a border police station,” the statement said.

One insider with close knowledge of the incident, who refused to be identified, told AFP by phone that villagers took more than 20 government and public security officials hostage in the police station.

He said they were angry about the detention of four other residents, and only when these were freed did they let the officials go.

More than 30 villagers had been injured in the unrest, he said, adding the area where the violence happened was quiet so far on Friday.

But residents in a village nearby — which comes under the jurisdiction of Lufeng — had protested in the morning and torn down a placard on the building site for a new public security bureau, he added.

“Land issues are a very serious problem here. The government has forcibly grabbed land and has not given compensation to farmers,” he said.

According to the statement, more than 10 police were wounded and six cars were wrecked by the protesters, who also blocked roads and trashed a local government office, a restaurant and a textile factory.

The statement put the number of protesters at 200, but the South China Morning Post, a Hong Kong daily, quoted a local businessman as saying there were several thousand.

The protesters were angered at the sale of collectively-owned land by local government officials without their consent, the paper said.

Calls to the Lufeng police and government went unanswered Friday, but blog posts from the area said the military had surrounded the city, blocking roads.

“All the roads leading into and out of our village have been sealed and guarded by the military, our entire village has been sealed,” Charles_suen posted on Sina’s Weibo, a Chinese site similar to Twitter.

A search for the word “Lufeng” appeared to be censored on Weibo on Friday, yielding a message saying results could not be shown due to “relevant laws, rules and policies”.
http://www.google.com/hostednews/afp/article/ALeqM5igmkF83fJd-OxuA5vsT38FnVrO_Q?docId=CNG.b2efdd27b5ce40ab871e7fe5bf8ca0f8.571