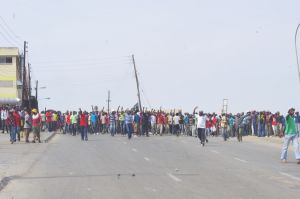 Manzini Police Regional Commissioner Meshack Ntshalintshali confirmed the statistics at about 6:30pm yesterday when the situation had calmed.

He said out of the 10 injured officers four were recruits from the police college while two were from the Close Protection Unit (CPU).

Ntshalintshali explained that members of the royal guard were not part of the officers manning the protest action.

“They were attacked near the Nazarene bus stop travelling in a van on official business, which was not part of the strike.

“The vehicle was pelted with stones, and it was extensively damaged,” he said.

Ntshalintshali added that most of the officers suffered head injuries due to the stones that were thrown at them.

Meanwhile, this reporter was saved from harm by Mafutseni Police Station Commander and some other transport workers from the protesters.

A group of about 50 protesters pounced on the reporter with the intention of taking his camera after he took pictures of them toyi-toying.

However, police were able to recover the equipment, and it was handed back to the members of the media.
http://www.times.co.sz/News/32624.html

This entry was posted in resistance and tagged riot, social tension, swaziland. Bookmark the permalink.