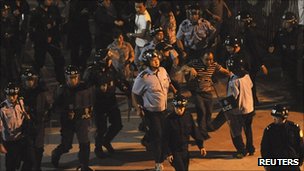 Around 500 protesters gathered in Haining city, Zhejiang province, on Thursday, demanding an explanations for the death of large numbers of fish in a nearby river, the Xinhua news agency said.

Industrial contamination had caused at least 31 cases of cancer among residents of Hongxiao village, which is part of Haining, they said, including six of leukaemia.

The demonstrators broke into the Jinko Solar factory, ransacking offices and overturning vehicles before being forced back by police, Xinhua said, adding that the violence continued on Friday and Saturday evenings.

Since April industrial waste from the plant has exceeded legal limits on pollutants, Xinhua quoted Chen Hongming, deputy head of the Haining office of environmental affairs as saying.

Jinko Solar, which is listed on the New York Stock Exchange, has more than 10,000 employees in plants located in Jiangxi and Zhejiang provinces, according to its website.

There was no comment on the website Sunday about the protests or the demonstrators’ allegations. Calls to the plant by AFP went unanswered.

Local authorities and police declined to comment when contacted by AFP.

The protests follow a number of a violent demonstrations in China, especially in the southern province of Guangdong, where tens of millions of migrant workers toil in the “workshop of the world”
http://www.google.com/hostednews/afp/article/ALeqM5hiJ6drkJzNvkoyZemZdg1GrzJQNg?docId=CNG.34b2c52c6e031868e70087b6365b3133.21