Riots against MINUSTAH in Port-au-Prince 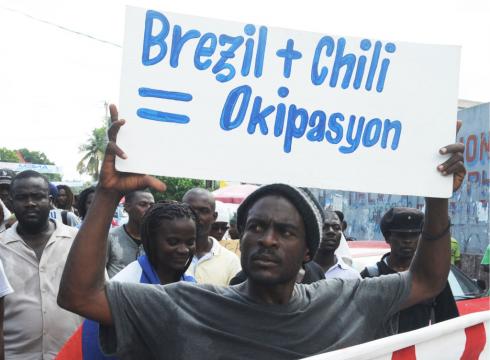 Port-au-Prince – Haitian police on Wednesday clashed with demonstrators who demanded the withdrawal of United Nations peacekeepers in a protest against the alleged rape of a local man by a group of Uruguayan Marines.

Police in the capital Port-au-Prince used teargas to stop about 300 protesters from entering a square in front of the damaged presidential palace where survivors of Haiti’s 2010 earthquake are still sheltering in a tent and tarpaulin camp.

Traffic was disrupted as pedestrians and camp dwellers, many clutching small children, fled to escape the swirling teargas. Some demonstrators hurled stones at police officers.

The UN Mission in Haiti (MINUSTAH) has faced a public outcry since the emergence earlier this month of a video shot by a cellphone camera that shows laughing Uruguayan Marines pinning a young Haitian man face down on a mattress and apparently assaulting him sexually.

In the latest incident to besmirch the reputation of the more than 12 000-strong UN peacekeeping force in the poor Caribbean state, four Uruguayan troops suspected of being involved in the July 28 assault have been detained and are facing court-martial. The alleged victim has testified to a Haitian judge that he was raped.

Yelling “MINUSTAH has to go” and “Rapists”, the demonstrators marched through streets of the earthquake-scarred capital. Some carried anti-UN banners, one of which called the UN peacekeepers in Haiti an “occupation” force.

The police moved to stop the protesters from entering the Champs de Mars square in front of the palace as the government has prohibited public demonstrations from being held there.

MINUSTAH has launched an inquiry into the July incident, saying this will determine if a rape actually occurred.

Uruguay has formally apologised to Haiti and condemned the actions of the accused soldiers as “aberrations”. – Reuters