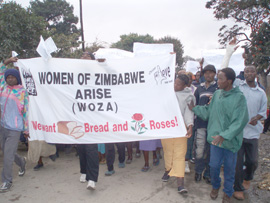 Twenty-eight members of Women and Men of Zimbabwe Arise (WOZA) were arrested when they took to the streets in Bulawayo to protest the Zimbabwe Electricity Supply company’s (ZESA) controversial billing system and poor service.
Up to 600 WOZA members took part in the demonstration, which came up against a strong police presence.

As part of its campaign for a fairer system for residents the group is calling on ZESA to install pre-paid meters for residents, who complain that they are being slapped with ridiculously high bills.

“The protest is to demand ZESA stop cutting off defaulters while they are unable to provide a full affordable service. Members also feel that they could be better off with prepaid meters than paying a full bill for a part service. Members with a fixed system of electricity which works on amps, are given a fixed charge which does not cater for the power cuts,” a statement read.

On Monday, WOZA co-leader Magodonga Mahlangu said police were stopping and searching commuter transport for WOZA material, but their members still managed to arrive at the meeting-up spots. Four protests started simultaneously from different points in the city and converged at the power suppliers offices in Lobengula Street.

“It was difficult to start on time because the officers were all over. I think there was over 100 uniformed police officers, riot and plain clothes [officers]” Mahlangu said. “We realised they were starting to arrest people.”

Of the 28 arrested, Mahlangu said 15 were later released. Despite the problems with the police, the protestors managed to deliver 63,000 ‘anti-abuse of power’ petition signatures to ZESA, she said.

She explained that WOZA had managed to collect 1.5million signatures from Bulawayo’s high density suburbs, but many of these were confiscated by the police in June when they raided a house WOZA operates from, leaving them with the 63,000.

In May, WOZA members in Bulawayo were arrested following another demonstration against ZESA over its continued power cuts and tariffs. One of the women was detained with her baby in the cells.

This entry was posted in resistance and tagged repression, social tension, zimbabwe. Bookmark the permalink.