SALFORD RIOTS FLARE AS CARS TORCHED AND LIDL GOES UP 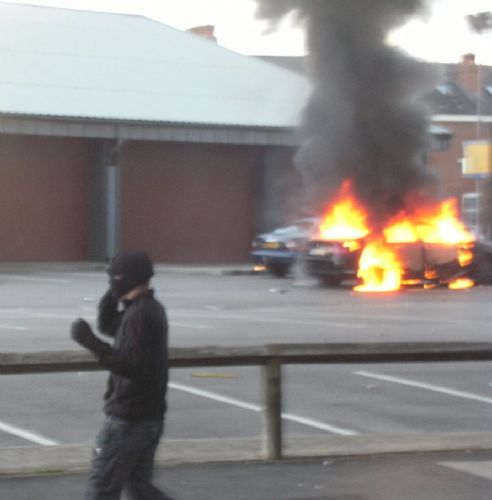 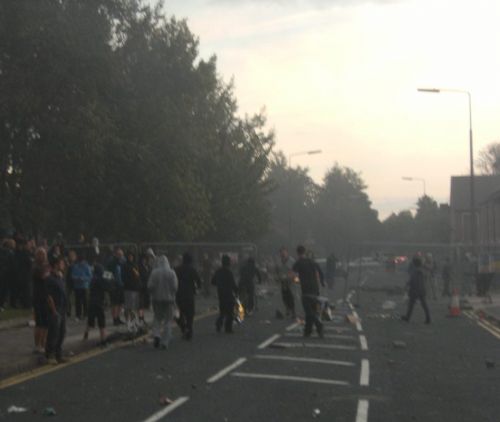 Around 300 people gathered around LIDL next to Salford Precinct tonight as its shelves were cleared and cars were torched in its car park.

Earlier, The Money Shop and Bargain Booze were amongst many shops on the Precinct which were attacked. By evening there was no police presence at all, only a helicopter whirring overhead.

This was more of a party than an angry riot as youngsters handed old people packs of cigs, and tins of Carlsberg freshly liberated from LIDL which is situated across the road from Salford Precinct and less than a stones throw away from the Urban Splash Chimney Pot Park upside down houses. About 200 yards from LIDL is the Clarendon area which has the highest child poverty in Salford – hitting 75%. (see here)

By 8:30pm this evening around 300 people of all ages and races had gathered in LIDL’s car park and beyond, cheering as explosions boomed from a burning car and balley-ed up kids let off fire extinguishers. Women struggled down the street with loaded LIDL bags. Beer from smashed bottles literally flowed down the road.

Pretty girls in white dresses filmed the whole spectacle on their mobile phones, older lads skinned up, the local community hung out of their tower block windows to get a good glimpse…all that was missing was the DJ. This was a very Salford riot.

Evidence of earlier nasty scenes were scattered all over the perimeter of Salford Precinct – burnt out cars, shutters ripped off shop windows, and bricks and sticks littering the roads.

Throughout, there was no police presence in sight as smiling people completely controlled the streets, driving though red lights, parking in the middle of the road, and walking unopposed into any Precinct shop that took their fancy.
http://www.salfordstar.com/article.asp?id=1060