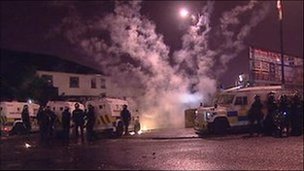 He will serve two years in jail and another two on licence.

The court heard that Martin was filmed on CCTV throwing a petrol bomb and 15 other missiles at police lines during the disturbances.

Earlier, a number of other men were sentenced over the rioting at the Ardoyne interface on 12 July last year.

They were charged with riot and criminal damage following serious disorder by nationalists over a disputed parade.

Among those in court were Robert Darling, 32, of Springmadden Court, Darren Greer, 19, of Alliance Avenue and Damien Power, 27, of Rossnareen Avenue, all Belfast.

Also appearing were Kyle Thornton, 24, of Rectory Road, Lurgan, and Gavin Savage, 25, with an address in Liverpool.

Darling has been sentenced to nine months in prison. He attacked a Land Rover and was hit by a plastic baton round.

Savage, who is originally from the area, threw missiles at police and the passing parade. He was jailed for 10 and a half months.

Greer had drunk between eight and 10 beers and has accepted that his behaviour that evening had been “extremely stupid and futile”.

He was sentenced to nine months in a young offenders centre.

Thornton had been staying with a friend when he went to Ardoyne to find a nephew and became involved. He was charged with riot and attempted criminal damage. He was jailed for nine months.

Power was jailed for 15 months for riot and attempted actual bodily harm.

The court heard that he had been part of a group using a plank to attack riot officers’ ankles below their shields.

Another accused, Liam Daykin,19, of Hannah Glen Heights, Belfast, had faced a single charge of riot. He was given 200 hours of community service.

Conor Cordner, 19, from Flax Mews and 28-year-old David Littlejohn from Mountainview Gardens, both in Belfast, and 42-year-old Rory McConville from Lake Street in Lurgan, were all handed 240-hour Community Service Orders after they pleaded guilty to charges of riot.

McConville was described by Judge Tom Burgess as “the stupidest person before the court, not least because of his age” and because he chose to travel to Belfast to go to the Ardoyne area.

Judge Burgess said the violence of that day had been “gratuitous” and had involved a large crowd.

He said those involved should reflect on how it felt for the officers facing it and for Ardoyne residents who had been denied the right to live their lives peacefully.

This entry was posted in capital and class, resistance, state security and tagged ireland. Bookmark the permalink.