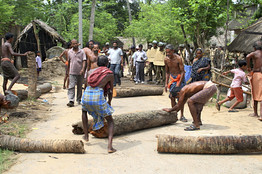 The Orissa High Court is scheduled to hear arguments this morning on a petition seeking a judicial stay on the temporarily suspended land acquisition process, according to the activist group that is opposing the POSCO project.

Villagers and political activists in the eastern state of Orissa are continuing to dig in their heels against the already much-delayed construction of a $12-billion plant by the Indian unit of South Korean steelmaker
For four weeks in a row local farmers, along with their children, have demonstrated against the government’s plans to move ahead with acquiring land for the steel plant, forcing the state to halt the process last month. The Posco-India Private Ltd. plant, first announced in 2005 by the world’s third-largest steel company by output, was billed as the largest single foreign investment in India.

Ranjan Swain, a cultivator of betel vines, rice and cashew nuts in Dhinkia village, in the coastal part of the state, said people like him are protesting the steel plant because they fear losing their livelihoods. He says at present he earns between 25,000-30,000 rupees ($561-$673) a month by selling betel vine leaves, which are used to wrap paan, a bundle of spices and sometimes tobacco that is chewed as a digestive. He considers this a job better than the one he says he has been promised as a laborer at the proposed steel plant.

“Work in the steel plant won’t be as good as betel vine farming, which gives us a decent earning by just working eight to 10 days a month,” Mr. Swain, who is 32 years old, said.

Mr. Swain said his entire family of five is participating in the protest. His three-and-a-half-year old child is at the forefront of the protest, forming the first line of defense with other children and school students. His wife and other village women form the second line of defense and the men form the next. “We sit on the ground from six in the morning till two in the afternoon. When the police come we lie on the ground,” he said.
http://blogs.wsj.com/korearealtime/2011/07/04/orissa-anti-posco-protest-is-a-family-affair/