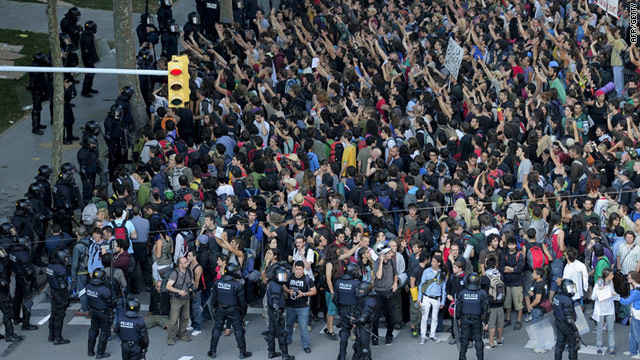 Of the 24 protesters injured, three were sent to hospital, said the spokeswoman, who by custom is not identified.

The demonstrators gathered outside the Catalan Parliament to protest the debate inside on the 2011 budget, which many expect to result in further economic austerity measures in Catalonia.

A spokeswoman for the Mossos regional police force said there had been injuries to protesters and the police but she could not immediately provide specifics.

The Catalan regional president, Artur Mas, arrived at Parliament in a police helicopter along with several regional members of Parliament, the police spokeswoman said.

But various elected politicians who entered by car or on foot to the sealed-off parliamentary grounds were jostled or heckled by the protesters, and some were spray painted with the color red, Spanish media reported.

The Catalan Parliament protests were seen as part of the so-called May 15 movement of demonstrations that have sprung up across Spain since last May 15, including tent cities in some emblematic public squares in various Spanish cities.

Various Spanish political leaders criticized the protesters on Wednesday for trying to disrupt the normal parliamentary activities which they said are fundamental to a democracy, Spanish media reported.

This entry was posted in capital and class, resistance and tagged austerity, protest, spain. Bookmark the permalink.