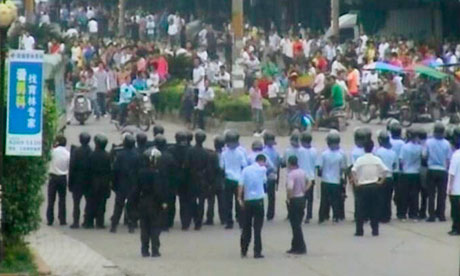 Chinese security forces mobilised to suppress protests in eastern China, a monitoring group and eyewitnesses said on Thursday, in the latest bout of unrest gripping parts of the country.

The unrest in Taizhou, Zhejiang province, broke out on Tuesday after the head of a local village government confronted petrol station staff during talks over land compensation fees that the station’s owner was due to pay villagers, the reports said.

Within hours, hundreds of fellow residents of Rishanfen village had surrounded the petrol station, blocked an adjacent airport expressway, and seized a man who had struck the village leader, according to the owner of a nearby factory, who witnessed the events.

Riot police clashed with villagers, said the factory owner, who spoke on condition of anonymity. Reinforcements arrived on Wednesday and officers detained about a dozen people, including the chief, other village officials and anyone found with images of the protest on their mobile phones, the man said.

Police and government officials in Taizhou were unavailable for comment.

As with many of the protests across China, the Taizhou incident appears rooted in disagreements over compensation for land seized for development.

The Hong Kong-based Information Center for Human Rights and Democracy said villagers squeezed by soaring inflation had been hoping for an increase in payments from businesses in the industrial park, including the gas station. The factory owner, however, said many believed that compensation offered by the petrol station had been embezzled by the former head of Rishanfen, now the local Communist party secretary – a much more powerful position.

The incident was the third large-scale outburst of unrest in recent days, mainly fuelled by anger over corruption.

Police arrested at least 25 people following weekend rioting in Xintang in the manufacturing powerhouse province of Guangdong. Security forces there clashed with migrant workers from the south-western province of Sichuan.

On Wednesday, a woman was arrested for spreading rumours of the death of a migrant blamed for fuelling the violence, local police said.

Last week, residents of Lichuan, in the central province of Hubei, laid siege to government offices following the death in custody of a local city council member. A number of local government officials have been fired or placed under investigation over the death in an attempt to assuage public anger.

Though the triggers for the events are different, most are driven by common resentments over social inequality, abuse of power and suppression of legitimate grievances.

The Communist party leadership has reacted nervously to the wave of protests, especially after popular uprisings began sweeping the Middle East and north Africa this year. In recent months, hundreds of government critics have been questioned, arrested or simply disappeared.