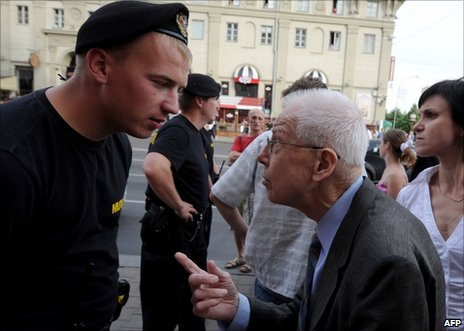 About 1,000 people have defied a ban in Belarus to hold a silent protest at the economic crisis in the capital Minsk, with police holding back.

No slogans were displayed at the rally, which was organised through social networking sites, correspondents say.

Mr Lukashenko warned this week he would “strike hard” against protesters.

Wednesday’s rally was a rare opposition gathering after the authorities launched an uncompromising crackdown on election-night protests in December.

The authoritarian rule of Mr Lukashenko, in power in the ex-Soviet republic for 16 years, has led to sanctions by Western governments.

This year, a balance of payments crisis gripped the country’s command economy, leading to a 36% devaluation of the local currency (the rouble) and inflation.

There was panic-buying of goods by citizens as they saw their savings drop in value.

Belarus is seeking billions of dollars in loans from the IMF and a Russian-led economic group. 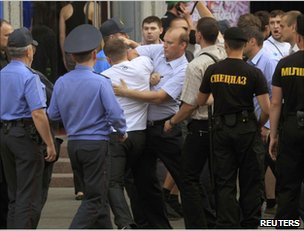 Some people were detained on Wednesday

There were no reports of clashes as a “flash mob” of demonstrators, mostly young people, formed in Minsk.

Police did turn back some people trying to reach the rally area in Minsk and some protesters were seen being detained, but no details of arrests were immediately available.

In another move to block the protesters, metro trains were reportedly ordered not to stop at city centre stations.

According to a Belarusian human rights group, Charter-97, small rallies were also held in other towns such as Vitebsk, Brest and Soligorsk.

On Tuesday, President Lukashenko promised to suppress any further protests against policies aimed at pulling the country out of its economic crisis.

He accused protest leaders of being “speculators”.

There have been reports that Belarusians have been taking goods abroad to sell, to take advantage of a big difference in prices since the devaluation.

Referring to protest calls on Facebook and its Russian-language equivalent vKontakte, he said: “We have the opposition in Minsk on social networks. They use the internet to call for strikes. I will look and watch, and then I will strike hard so that they will not get a chance to defect abroad.”

One opposition video posted on the internet under the slogan “Conquer your fear: become a hero” urged opponents of Mr Lukashenko to demonstrate in Minsk and launch a national strike from 3 July.

In another move, which ultimately may be of greater concern to the Belarusian leader who has retained a loyal following among large sections of the population, trade unions warned that rising prices were leading to a greater mood of protest in the country.

Minsk can expect to receive $1.2bn (£700m; 800m euros) in loans from a Russian-led bail-out fund this year, Reuters news agency notes, but it also needs IMF support of between $3bn and $8bn.

Ending a two-week mission to Minsk on Monday, the IMF gave only lukewarm support for government anti-crisis policies, the agency says.

Delivery of the aid has been complicated by Mr Lukashenko’s poor political image abroad.

During the election crackdown, opposition leaders including presidential candidates were arrested during mass protests against the government, which was accused of rigging the ballot.

International monitors said the contest, in which Mr Lukashenko officially won 80% of the vote, had been deeply flawed.

This entry was posted in capital and class, resistance, state control, state security and tagged belarus, protest. Bookmark the permalink.