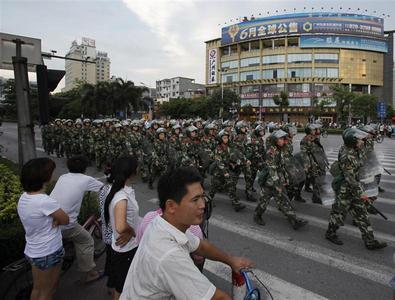 No major incidents have been reported since Sunday in Xintang in the southern manufacturing hub of Guangdong province, where tens of thousands of migrant workers enraged by the reported beating of a street vendor turned on authorities.

While violent protests in China have become frequent over the past decade, recent weeks have seemed particularly turbulent. The vast region of Inner Mongolia last month saw its biggest street demonstrations in two decades, while a man angry over land seizures set off three homemade bombs at government buildings in another southern city, killing three people and wounding at least nine others.

Thousands of protesters attacked government offices in the central city of Lichuan last week following the alleged beating death of a local city council member while in police custody.

Though the triggers for the events are different, most are driven by common resentments over social inequality, abuse of power and suppression of legitimate grievances.

China’s Communist Party leadership has reacted nervously to the turmoil, especially after popular uprisings began sweeping the Middle East and North Africa this year. In recent months, hundreds of government critics have been questioned, arrested or simply disappeared.

Xintang residents contacted by phone Tuesday said security forces were a constant presence on city streets and shops and restaurants had been ordered to close early.

They said they had been told not to go out at night or transmit photos of the unrest online. That demand reflects authorities’ fears of unrest spreading via the Internet amid scattered calls for migrants to converge on Xintang for a new round of protests to demand the release of 25 people reportedly arrested over the violence.

“Nobody wants to come out. They fear running into danger,” said a worker at the Xintang Ruilong clothing factory, located near the scene of Sunday’s rioting outside the local government headquarters. The man would only give his surname, Wang, for fear of reprisals.

Along with the security crackdown, authorities have sought to pressure businesses to prevent their workers joining any protests. Mangers from 1,200 businesses in the area were called to a meeting Monday and ordered to “pay good attention to your people and keep a close eye on your front gate.”

“Get your own houses in order and act on your own to maintain social stability,” managers were told, according to an account posted on the Xintang government’s website.

Staff answering calls to local police and government offices said they were not permitted to comment further and refused to give their names.

The violence in Xintang broke out Friday evening after a pregnant woman was pushed to the ground in a sweep against street vendors, most of whom are migrants from the southwestern province of Sichuan. Such disputes are common and bystanders often side with the vendors and accuse police of heavy-handed tactics.
http://www.google.com/hostednews/ap/article/ALeqM5h_2RJfe9OH1iAcykORfhuQMJ55Kg?docId=a6348a35fcf944a9a9de3f5e8a951629