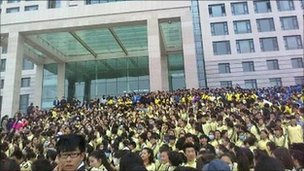 BEIJING, May 27 (Reuters) – Chinese authorities sealed off parts of the northern region of Inner Mongolia on Friday in what residents described as martial law, to try to quell a fifth day of protests by ethnic Mongolians over the death of a herder in a hit-and-run accident.

China keeps a tight grip over Inner Mongolia and other strategic border regions including Tibet and Xinjiang, which are home to large numbers of ethnic minorities, as well as being rich in natural resources.

But China’s Mongolians, who make up less than 20 percent of the roughly 24 million population of the Inner Mongolian Autonomous Region, rarely take to the streets, unlike Tibetans or Xinjiang’s Uighurs, making the latest protests highly unusual.

Residents in Shuluun Huh Banner, or Zheng Lan Qi in Chinese, and Left Ujumchin Banner, or Xi Wu Qi in Chinese, near Inner Mongolia’s Xilinhot city, told Reuters that martial law was imposed on Friday. Banner is a traditional term for county.

“There was martial law declared this morning,” said one resident of Shuluun Huh Banner who gave her name as Tana. “It’s still ongoing with fewer guards right now, but some police are on the street.”

Despite this, hundreds of Mongolians defied the tighter security and marched towards the government building in Shuluun Huh Banner before noon, said Enghebatu Togochog of the New York-based Southern Mongolian Human Rights Information Centre.

“Students have been locked up in their schools and they aren’t allowed to join in their protests,” Togochog said, adding that one or two high schools and several middle schools have been sealed off.

Asked to comment on the protests, an official answering the telephone at the Inner Mongolia government’s propaganda office said: “I have no time, goodbye,” before hanging up.

An official at the Left Ujumchin Banner, where protests took place on Thursday, also hung up on being asked about the protests. Repeated calls to the Shuluun Huh government were not answered.

“It has been in a state of siege since this morning, everything was fine here yesterday,” said a resident surnamed Zhou in Ujumchin Banner. “At the moment, police are patrolling the street.”

An official in the bus station near the government building in Left Ujumchin Banner, who refused to give her name, said all buses had stopped since the morning because of martial law.

The protests were set off by the death earlier this month of a Mongolian herder, Mergen, who was killed when he was struck by a coal truck. The government has announced the arrest of two Han Chinese for homicide, though this has failed to stem public anger.

The latest demonstrations have broadened their scope, with those taking part demanding greater official protection for their culture and traditional way of life.

Inner Mongolia, which covers more than a tenth of China’s land mass and borders Mongolia proper, is supposed to offer a high degree of self-rule.

In practice, though, Mongolians say the Han Chinese majority run the show and have been the main beneficiaries of economic development.

Inner Mongolia is China’s largest producer of coal, a commodity that feeds well over half the country’s power plants and on which China depends for its breakneck economic growth.

“The rapid development of resource extraction has resulted in a terrible blow to the interests of the Mongolians,” Tumen-ulzii, an ethnic Mongolian Chinese living in exile in the Mongolian capital, Ulan Bator, told Reuters by telephone.

“People just can’t stand it any more,” he said. “They have no way of following their traditional way of life. The death of Mergen has become a spark, it has united the whole Mongolian people (in China).”
http://www.reuters.com/article/2011/05/27/china-protest-mongolians-idUSL3E7GR11X20110527