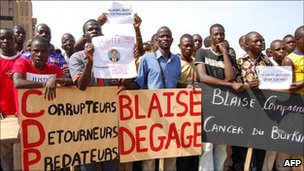 Three people died and at least 136 were injured during protests by students and troops in Burkina Faso’s capital, Ouagadougou, yesterday, the head of the local hospital said, according to the online newspaper Fasozine.

Only three of the injured remain in the Yalgado Ouedraogo hospital, Fasozine cited the hospital’s director-general, Lassande Bangagne, as saying.

Burkina Faso, Africa’s biggest cotton producer, has been in turmoil since February, when five people were killed during demonstrations against the police following the death of a student in their custody. Soldiers in the West African nation mutinied last month, forcing President Blaise Compaore, who has ruled the country since seizing power in a coup in 1987, to dissolve the government and fire the head of his presidential guard and the chiefs of the army, air force and police.
http://www.bloomberg.com/news/2011-05-25/three-killed-136-injured-in-burkina-faso-protest-fasozine-says.html

This entry was posted in resistance and tagged burkina faso, repression, riot. Bookmark the permalink.