Mass Demonstrations to be Broken Up by “Tornado” 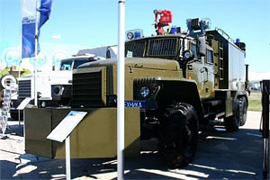 The “Tornado.” Source: pptechnika.comRussian engineers have developed a new piece of equipment to break up public demonstrations. A prototype of the “Tornado” is discussed in the newest edition of the journal Issues in Military Technology, Gazeta.ru reports.

The vehicle, which is based on the Ural off-road army truck, was designed for use by internal military forces to suppress mass unrest.

According to the journal, the Tornado has the capability to break through barriers, lift and move cargo, remove rubble and carry out other operations to help internal forces suppress riots in a city environment. The specially engineered vehicle consists of an armored body mounted with a water jet capable of striking up to 50 meters.

In addition, the vehicle is equipped with a special grenade launcher, a fire-extinguishing system with fire hose hookup, ladders that can extend up to three floors, a searchlight, a loudspeaker system, and video cameras.

To prevent any possible onslaught from protesters, the Tornado can be sealed to prevent tear gas from leaking inside and is equipped with fire extinguishers.

Authors of the journal say the Tornado is essentially a consolidation of different forms of military technology, allowing troops to rely on one machine instead of four. This will aid engineering units of the internal forces during operations in city conditions “while special operations to suppress mass unrest are being carried out.”

During training exercises in 2009, Russian security forces were spotted using trucks armed with water cannons to break into buildings and knock down barriers. The same exercises also involved groups of pensioners blocking a federal highway in a cry for improved social support. At the time, activists from Eduard Limonov’s banned National Bolshevik Party held protests against the use of water cannons on demonstrators.
http://www.theotherrussia.org/2011/05/24/mass-demonstrations-to-be-broken-up-by-tornado/