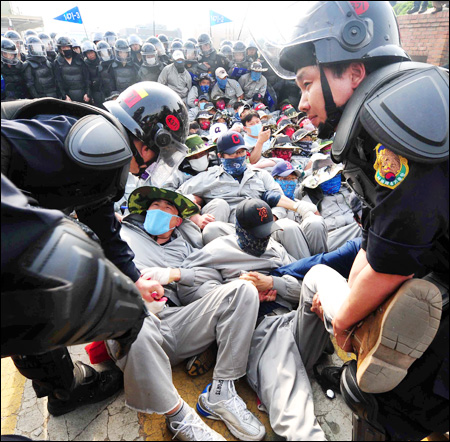 Thousands of riot police raided a regional auto parts manufacturing plant, Tuesday, to put an end to a week-long “illegal” strike that disrupted the production of Hyundai Motor and other major automakers.

Police met little resistance from the workers while dispersing them. About 500 unionists were apprehended.

“We had to use force to disperse the striking workers and hand control of the facility back to the management. The raid was unavoidable as last-minute talks between management and the employees on strike fell apart,” a police officer said.

Police will decide whether to detain the workers or not after looking into their involvement in the walkout.

Police obtained arrest warrants for two union leaders and a search warrant for union offices from the Daejeon District Court.

He said 31 companies of riot police and three police vehicles equipped with water cannons were deployed to the scene.

Police helicopters hovered above the site to monitor the movements of the striking workers.

More than 500 unionized workers began occupying the factory on May 18 after they failed to reach common ground with their management on working conditions and salaries. Following the walkout, the management of Yoosung Enterprise, which specializes in piston rings, cylinder liners and other key components of car engines, imposed a lockout on the plant.

On Monday, the company’s management and labor held unsuccessful talks to resolve the confrontation.

“Law enforcement authorities refused to follow law and order by sending riot police into the plant. This is tantamount to a barbaric act. We will fight along with unionized workers of Yoosung Enterprise to the end until we achieve our goals,” the KCTU said.

It said it will launch a nationwide campaign to force President Lee Myung-bak to step down.

Despite the strike coming to an end on Tuesday, it will likely take some time for the plant to resume operations, meaning that automakers will have to grapple with output disruption for the time being.

According to the auto industry, the ongoing strike has forced automakers to suspend production of several vehicles due to a shortage of engine components.

Yoosung supplies key engine components to all five automakers operating here. In particular, Hyundai Motor and Kia Motors, the nation’s two largest automakers, depend heavily on its supply as they receive 70 percent of engine-related components from the firm.

Hyundai and Kia said if the walkout lasts through the end of May, they will be forced to cut output by as much as 50,000 cars. The other three carmakers — GM Korea, Renault Samsung and Ssangyong Motor — will see their production drop by a combined 10,000.

Hyundai has already been forced to shut down its assembly line for the Tucson ix sports utility vehicle, while Kia had to halt production of its Carnival passenger minivan.

According to the Korea Employers Federation, the labor strike has already cost automakers over 150 billion won in lost output as of Tuesday. From May 26, they will likely incur over 100 billion won in losses on a daily basis.
http://www.koreatimes.co.kr/www/news/nation/2011/05/117_87577.html