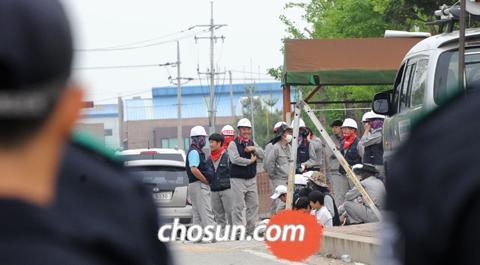 Korean carmakers may have to stop all their production lines because of an illegal strike at auto part maker Yoosung Enterprise. The Yoosung union has been occupying the part maker’s plant in Asan, South Chungcheong Province since last Wednesday, putting a halt to the production line for five days.

Yoosung holds 80 percent of the domestic market for piston rings, which although they cost a mere W1,000-2,000 apiece (US$1=W1,083) are vital engine components.

Due to the strike, Kia Motors has run out of inventory and stopped production of the Carnival diesel at its plant in Soha-ri, Gyeonggi Province since Friday. Hyundai Motor’s plant in Ulsan canceled scheduled overtime work to manufacture the Santa Fe, Tucson ix and Veracruz models on Sunday and decided to suspend all the production lines from Monday.

Unless supply of piston rings resumes, Hyundai-Kia’s other plants in Asan, Hwaseong, Jeonju and Gwangju will have to suspend the production of the Sonata, Avante and K5 from Monday. GM Korea, Renault Samsung and Ssangyong Motors will also face suspension of production on May 30. The strike will likely interrupt production of 50,000 vehicles in May alone, Hyundai Motor said, affecting 25 Hyundai models and 17 Kia models.

Yoosung staff have been striking on and off since January, asking for new shift schedules and pay systems. “Of 500-700 union members occupying the plant, over 100 are not employees of the company but outside provocateurs,” an Asan police spokesman said.

The Korean car industry has seen a jump in global sales since the Japanese earthquake and tsunami in March hampered production there. But now carmakers are worried they could lose momentum.
http://english.chosun.com/site/data/html_dir/2011/05/23/2011052300788.html