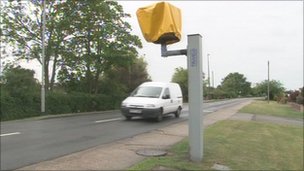 Almost a third of Lincolnshire’s speed cameras are out of action because of vandalism, according to road safety bosses.

Sixteen of the county’s 52 cameras have been seriously damaged, with many having been set on fire.

Lincolnshire Road Safety Partnership has condemned the attacks, saying lives are being put at risk.

Spokesman John Siddle said it can cost about £40,000 to replace a single camera.

Among the devices damaged is a camera on the A46 in the west of Lincoln.

Mr Siddle said: “That camera is protecting the standing traffic that mounts up at the A57 roundabout.

“At certain times of the day the traffic is backed up and people come down the hill at high speed and run on a bit.”

He added: “The idea of the speed camera is to slow them down so they can stop in time for the standing traffic that’s ahead of them. And to burn that camera is just crazy – they’re putting people’s lives at risk by doing this.”

The partnership said it has been holding off repairing the cameras for two years amid uncertainty about their future in the government’s spending review.

However, it has been confirmed that Lincolnshire’s cameras will not be switched off, and repair and improvement work is now due to get under way.

Mr Siddle said: “What we’ll be doing is upgrading to the digital system that we’re buying in. We’ll have a 3G link where instead of wet film it all gets digitally done and sent to a back office – so burning a camera won’t really achieve a lot.”
http://www.bbc.co.uk/news/uk-england-lincolnshire-13409566

This entry was posted in resistance and tagged social tension, united kingdom. Bookmark the permalink.