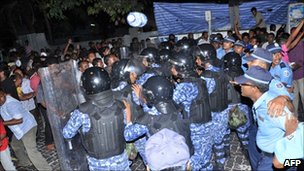 The Maldives is bracing for an escalation of protests Friday, after a week of nightly clashes between anti-government protesters and police.  Protesters say the movement is fueled by frustration over economic mismanagement and high commodity prices.

Police say five nights of anti-government protest in Maldives’ capital, Male, have occasionally turned violent, with bricks and gasoline bombs being hurled at riot officers. Dozens of arrests have been made.

The protest movement is organized in part by a breakaway political faction loyal to the Maldives’ former president, Maumoon Abdul Gayoom.  He was the country’s authoritarian leader for 30 years, until current President Mohamed Nasheed ended one-party rule by winning the country’s first democratic election.

President Nasheed’s press secretary, Mohamad Zuhair,  accused Gayoom of manipulating the protests. He dismissed any comparison of the current demonstrations to people-power movements in the Middle East.

“I find it ironic that in the Arab street today, you find democratic supporters coming out to topple dictatorships, and here you find supporters of the former dictator trying to oust the democratically elected government,” said Zuhair.

Maldivian activist and political scientist Haulath Mohamed acknowledged there is a political dimension to the protests. She said protesters are fed up, however, with what they see as Nasheed’s economic mismanagement, especially his decision to let the country’s currency float freely against the dollar.

“They are not after ousting President Nasheed, which is what he likes to portray,” said Mohamed. “It is about getting social justice, especially the dollar crisis and the devaluation of money that has led to the doubling and tripling of basic services and goods.”

Protest organizers say they plan to transport more demonstrators to the capital by boat from the hundreds of small islands that make up the nation.

Leaders of the Maldives’ main ruling party issued a statement promising “direct action to defend the government,” possibly setting the stage for clashes.

Maldives Police Service spokesman Ahmed Shiham said there will be sufficient security in the capital. “Police will be ready, and if there is any violence or anything, police will take necessary action.”

The Maldives’ many tropical beaches, just southwest of the tip of India, are a renowned resort destination. Some people in the predominantly Muslim nation are worried that continued protests could scare away tourists, slowing down the hospitality industry that is the lifeblood of the country’s economy.