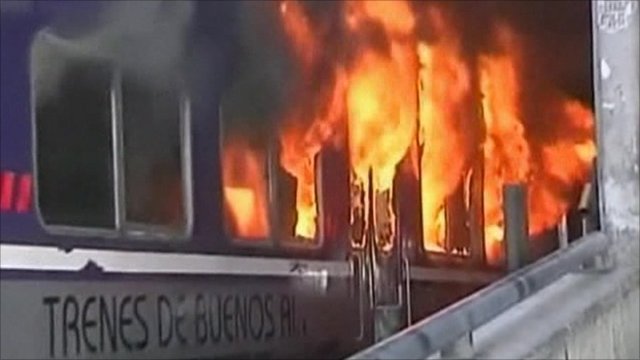 Train passengers in Argentina furious about delays to their journeys have set fire to three commuter trains.

Firefighters and police were called out to deal with disturbances at three busy railway stations near the capital, Buenos Aires.

Police say at least eight carriages were burnt. The first such disturbance happened at the Haedo rail station.

In one incident, the train driver and a ticket inspector were forced off a train by angry travellers.

The trouble started during the Monday morning rush hour as suburban office workers embarked on their daily commute to the capital city.

Stranded passengers then set fire to at least eight wagons at three stations along the railway line.

The unrest quickly spread from the Haedo stop to the neighbouring stations of Ramos Mejia and Cuidadela.

In one incident angry commuters threw the train driver and the ticket inspector off the train.

Ticket offices belonging to at least one station were ransacked and vending machines were vandalised.

Firefighters complained that the angry passengers were trying to obstruct their work when they arrived at the scene.

Witnesses said the fire brigade was pelted with large stones.

Trenes de Buenos Aires, which operates the train service, suspects the unrest was a deliberate act of industrial sabotage against the firm.

Spokesman Gustavo Gago said: “The near-simultaneous nature of the fires was striking.”

“The fact that security cameras were damaged at all three stations makes one think it was something organised and intentional,” he said.

Police have confirmed the arrest of at least three passengers.

This entry was posted in resistance and tagged argentina, repression, riot, social tension. Bookmark the permalink.