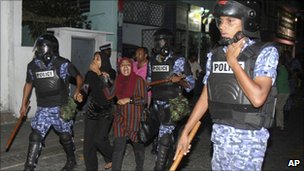 A second night of violent protests in the capital city ended with the arrest of several demonstrators after petrol bombs were thrown at police in the early hours of this morning.

Protesters gathered last night near the Tsunami Monument in Boduthakurufaanu Magu and marched towards the intersection of Male’s main road of Majeedhee Magu and the tourist street of Chandhanee Magu; the same location as Sunday morning’s sit-down protest.

Protesters demanded the government lower the cost of living and called on President Mohamed Nasheed to resign, claiming people were increasingly unable to afford basic commodities following the government’s effective devaluation of the rufiya.

Police blockaded the area to vehicles and maintained a presence, but unlike Sunday used no tear gas or force on the crowd.

Riot police at the scene were bombared with petrol bombs, stones, water bottles, chilli sauce, “and a hammer”, according to police Sub-Inspector Ahmed Shiyam.

“The protesters were trying to incite police. Some police were injured but not seriously,” he said.

Police yesterday issued a statement claiming that the the first round of violent protests was premeditated after discovering a ready supply of rocks stashed near the intersection.

Several police were injured when the protest turned violent

During last night’s protests, “police received information that petrol bombs were being made in the toilet area of a nearby mosque. Police attended the mosque and found petrol bombs and equipment used to make them.”

Police water cannon and tear gas were deployed in the area, but were not used. A number of violent protesters into custody who were later identified as known gang members. No MPs were arrested.

“We saw two journalists injured by a stone, although not seriously,” Shiyam said.

Gasim addressed the crowd but did not stay long, while Thasmeen joined the protesters.

Spokesperson for the DRP, Irahim ‘Mavota’ Shareef, confirmed to Minivan News that the protest was authorised by the DRP Council – significant, as Umar Naseer was dismissed from the party last year for leading similar protests on behalf of the opposition without approval.

Meanwhile, Maldivian Democratic Party (MDP) parliamentary group leader and MP ‘Reeko’ Moosa Manik led a group of around 100 MDP activists in an apparent attempt to clash with the DRP supporters, but were quickly cut off from the demonstration by riot police.

Both crowds threw objects at each other, with Moosa’s crowd yelling that they did not believe that living costs had risen.

After warning protesters several times to leave the area, police dispersed the crowd by slowly moving into the intersection. The protest was finally dispersed around 3am early this morning.

Speaking to Minivan News, DRP MP and leader of the party’s youth wing Ahmed Mahlouf claimed that last night’s crowds were larger than the previous protest – particularly the number of young people present.

“The crowds are much greater than last night and I am confident that the turnout will be even bigger tomorrow night,” he said.

The protests would be begin at the artificial beach area every night at 8:45pm ahead of a “huge” protest scheduled for Friday, Mahlouf said.

He acknowledged that the protests had descended into levels of violence that “could not be accepted” with some groups of people throwing stones and cans of petrol at police that at one point also threating to set a shop on fire.

“There is some suspicion that the MDP may have paid these individuals to do this.  There were so many stones and petrol bottles thrown at police as well as hitting stores,” he said.

“We cannot accept these levels of violence and as protestors we just want to raise our voices and get our point across about high prices.  Even last night we were asking police to arrest these people, though this difficult to do in large groups of people.”

The protests have been claimed by some opposition politicians to have been organised by, and represent, youth groups in the country rather than a single partisan interest.

Amidst plans by organisers for further protests throughout the week, Mahlouf said his party would nonetheless be having a meeting today to decide whether to talk with police about possible means to reduce potentially violent confrontations.

“A lot of these techniques were used by the MDP before they came into power,” he claimed.  “I do not want to see a repeat of that.”

However, the MP claimed that a number of senior MDP activists had also joined the protests and spoke out concerning government economic policy, including some friends of President Mohamed Nasheed.

“We know people aren’t with them any more and that they don’t believe what he [President Nasheed] says,” he said.  “Even in the MDP leadership elections where he supported the appointment of both Ibrahim Zaki and Mohamed Aslam, the party has voted against him.”

MDP spokesperson Ahmed Haleem Zaki claimed that the intervention of opposition groups like the DRP in the portests formed part of wider plans to create “drama” that distracted from a failure to pass so-called anti-gang legislation in the Majlis this week.

“Today parliament is supposed to be considering passing a bill that would give more power to police to arrest gang members,” he said. “This is a political problem where we have an important bill needing to be passed and the opposition parties do not want it to go through.

Haleem did confirm that fellow MDP MP ‘Reeko’ Moosa Manik had turned up with some supporters during the protest, but said he was not himself responsible for instigating violence.

“Moosa was hit by stones and was then taken to hospital, but I can’t confirm if he was seriously injured or not,” he said.

Haleem claimed that Moosa’s presence was part of plans to try to call for an end to the violence and denied that his presence may have exacerbated confrontations at the protest site.

“We do not want violence as we are the [country’s] ruling party. Moosa was there to support police and ask protests to go home peacefully,” he claimed.

When questioned over whether MDP supporters were amongst the young people protesting, Haleem said that the party accepted that the cost of living was a major issue and that the last two years had thrown up a number of difficulties for the government in balancing the nation’s finances.

“However, we had the previous government who treated Maldivian money as if it was their own family fortune for many years,” he said. “They left the economy in such a situation that the government has been forced to take drastic measures. People know that the cost of living is high all over the world from China, to the US and the UK.”

According to Haleem, opposition parties had sought to use the protests to court drama and political instability in order to try and garner negative press coverage of President Nasheed through major news networks like CNN and Al Jazeera.

“I think [Nasheed] is very popular right now and that is why the opposition want drama,” he said. “[The opposition] thought they could compare the protests to mass movements in Egypt’s Tahrir Square – a site linked to the fall of former Egyptian leader Hosni Mubarak – but people are not stupid and know very well that this isn’t the case. After four or five months we expect the economic situation to have improved.”

The Adhaalath Party said it believed that the youth protest was “a peaceful gathering.”

”Lowerer living expenses is one of the main pledges of this government,” said the party. ”We call on the government to find a wise solution for this issue.”

The Adhaalath Party said that the protest was conducted lawfully and that ”it is not acceptable to use tear gas and batons to disperse a lawful protest.”

The party also expressed concern that police officers and protesters were injured during Sunday night’s protest.

The government has struggled to cope with an exacerbating dollar shortage brought on by a high budget deficit – triggered by a spiralling public sector expenditure – in comparison with the foreign currency flowing into the country. Civil service expenditure has increased in real terms by 400 percent since 2002.

Banks subsequently demonstrated reluctance to sell dollars at the pegged rate of Rf 12.85, and high demand for travel, commodities and overseas medical treatment forced most institutions to ration their supply or turn to the flourishing blackmarket.

After a short-lived attempt to crack down on the illegal exchange of dollars, the government floated the rufiya within a 20 percent band, effectively allowing it to be sold at up to Rf 15.42 to the dollar.

The International Monetary Fund (IMF), which has been critical of the government’s growing expenditure despite a large budget deficit, praised the decision as a step towards a mature and sustainable economy.

“Today’s bold step by the authorities represents an important move toward restoring external sustainability,” the IMF said in a statement. “IMF staff support this decision made by the authorities. We remain in close contact and are ready to offer any technical assistance that they may request.”

However, many companies dealing in dollar commodities immediately raised their exchange rates to Rf 15.42, along with the Bank of Maldives.

The government’s move, while broadly unpopular, acknowledges the devaluation of the rufiya in the wake of increased expenditure and its own inability to overcome the political obstacles inherent in reducing spending on the country’s bloated civil service.

Yet as Maldives relies almost entirely on imported goods and fuel, and many ordinary citizens have found themselves harshly affected by short-term spike in prices of up to 20 percent as the rufiya settles.

“We do not really know, based on the breadth of the domestic economy, what the value of the Maldivian rufiyaa is right now,” Economic Development Minister Mahmoud Razee admitted at a recent press conference.

The government has said it hopes the rufiya will stabilise within three months.
http://minivannews.com/politics/petrol-bombs-found-in-mosque-during-second-night-of-anti-government-protests-19651