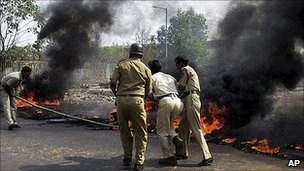 RIOTING CONTINUED yesterday at a small town in western India as protesters opposing government plans to build a nuclear complex ransacked a hospital and burnt buses.

Police had shot dead one protester on Monday at Jaitapur, 420km south of India’s financial capital, Mumbai. Locals and anti-nuclear activists have been protesting at Jaitapur against construction of a proposed 9,900 megawatt six-reactor facility by French energy giant Areva.

Locals shouted slogans as the protest gained momentum against what is billed as the world’s largest nuclear power complex, costing an estimated $10 billion (€6.97 billion).

Vociferous opposition to the complex has grown in the wake of the ongoing crisis at Japan’s Fukushima nuclear plant, with activists and experts claiming Jaitapur is located in a seismic zone.

Posters at Jaitapur yesterday portrayed horrifying scenes from Fukushima, and anti-nuclear activists warned of what could be in store for the region if the plant were to be built and a Japanese-type disaster were to occur.

Environmentalists maintain the Konkan belt, in which Jaitapur lies, is one of the world’s most bio-diverse regions and would be destroyed by a nuclear complex.

In response to the growing opposition, India’s environment minister Jairam Ramesh last week reiterated his government’s intention to proceed with the plant’s construction but maintained that extra safeguards would be undertaken in view of the Fukushima disaster.

The minister termed Fukushima a “wake-up call”, adding that India could not abandon its quest for “clean” nuclear energy to fuel its high economic growth rate.

Construction of the Jaitapur complex is slated to begin later this year and the first unit is expected to start generating power by 2018. Officials claim the Jaitapur nuclear plant, one of around 30 planned across the country over 10 to 15 years, would augment nuclear power generation to about 13 per cent of the total, from the current 3 per cent.

India currently runs 20 small nuclear reactors with a capacity of 4,780 megawatts (MW), and through the new plants hopes to boost nuclear power generation to 7,280 MW by 2012 and to 63,000 MW two decades later, but at tremendous cost.

Critics claim the Jaitapur reactors, based on European pressurised reactor technology, had not yet been commissioned anywhere in the world. India’s powerful Marxists also raised “questions about the reliability and safety of these reactors”, and said their construction had run into difficulties in France and Finland. They were also “much more expensive” than other reactors on offer, the Marxists said.

India was permitted to trade in civil nuclear fuel and equipment after the 2008 nuclear energy pact with the US – without it having to adhere to the Nuclear Non-Proliferation Treaty or forgo its nuclear weapons programme.

In return for international inspection of 14 of its reactors and related facilities, India was granted global access to foreign civil nuclear technology, which was endorsed by the 45-member Nuclear Suppliers’ Group.
http://www.irishtimes.com/newspaper/world/2011/0420/1224295066406.html