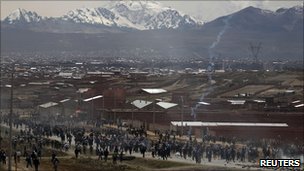 Protesters in Bolivia have blocked main roads and clashed with police, on the ninth day of nationwide demonstrations against the government.

Police used tear gas to clear the main road south of La Paz, and protesters fought back with stones and slingshots.

Teachers and health workers are on strike to demand a 15% pay increase.

The unrest is the worst yet faced by President Evo Morales, who once led similar protests that forced two previous presidents from power.

There have also been street protests and road blockades in cities across Bolivia, including Cochabamba, Santa Cruz and Tarija.

The biggest clashes happened 45km south of La Paz, Bolivia’s main city, where around 2,000 rural teachers used rocks to block the main road to the rest of the country.

Several people were reported injured as riot police moved in to reopen the road.

The protests are being led by Bolivia’s main trade union federation, the COB, which is demanding a 15% pay rise for all workers.

The government has already approved a 10% increase for teachers, soldiers and police, and says it cannot afford any more.

“The president and government have always been prepared for dialogue with all sectors, and so the means of pressure they have adopted are not justified,” Information Minister Ivan Canelas said.

The COB is demanding direct talks with President Morales rather than his ministers.

“”The mobilisations will continue, there will be no truce,” COB leader Pedro Montes told reporters.

Mr Morales has been visiting the southern city of Tarija, but pulled out of a public appearance there because of protests.

Bolivia’s trade union movement was until recently a close ally of Mr Morales, and helped him win election in 2005 and 2009.

The left-wing Bolivian president is himself a trade union leader, and some of his ministers are former leaders of the COB.

But his popularity fell sharply last December when he attempted to cut fuel price subsidies, only to back down in the face of nationwide protests.

Since then, rising transport and food prices and shortages of some basic goods, such as sugar, have caused rising discontent.

Bolivia’s last two presidents were forced from office by mass demonstrations and road blockades which Evo Morales helped to lead.