Terrorism and communism (internationalist leaflet on the “German Autumn”) 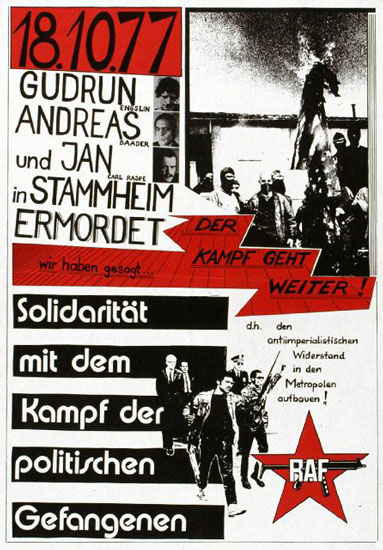 “As long as human labor power, and, consequently, life itself, remain articles of sale and purchase, of exploitation and robbery, the principle of the “sacredness of human life” remains a shameful lie, uttered with the object of keeping the oppressed slaves in their chains” (Trotsky, Terrorism and Communism, 1921)

The entire bourgeois world, which supposedly holds dear the sacredness of human life, is rejoicing over the defeat of the terrorist action of these last days [the hijacking of the Lufthansa airliner] and the deaths of the militants of the Red Army Faction and their comrades in struggle, the latest victims of its inhuman social order.

The representatives and beneficiaries of capitalist society – a society responsible for two imperialist wars (more than 70 million victims), the extermination of entire peoples, countless colonial wars, a life without hope for the mass of exploited and the deaths silently caused daily by the violence of its production for profit – have been celebrating throughout the world following these events, and they do so for good reason.

They are all the more overjoyed because they even have been able to temporarily re-direct the conscious and unconscious revolt, the dissatisfaction and bitterness caused by capitalism, so that it is directed against the very ones who have dared to fight this system with the only weapons this system knows and recognizes: the weapons of violence.

Are the terrorists responsible for unemployment? For speedup? For the fall of real wages? For the rising rents? For the world economic crisis? For the progressive transformation of the entire world into a polluted zone? For the increasing antagonisms between states? For the arms build-up throughout the world in preparation for new massacres? In short are they responsible for the turbulence and growing insecurity which characterize capitalist society in the East as in the West? Of course not, this is obvious.

Individual terrorism is a consequence and a symptom of the crisis of capitalist society. In the case we are dealing with today it is a particularly significant symptom since the terrorists try more or less directly to strike the state, that is to say the organ of coercion which protects this society of exploitation, insecurity and massacres, and which utilizes for this purpose all possible means of repression, ideological manipulation and armed violence.

All the parties, all the institutions and personalities who support this state, point to the terrorist actions to justify the growing repression and make the terrorists into scapegoats. However this repression is not aimed just at the terrorists. Those who govern know perfectly well that a handful of terrorists cannot shake capitalist rule.

However they also know that the terrorists today – as isolated and powerless as they are – give just the first taste of what the working class will inevitably do tomorrow as it is pushed by the increasing misery of its life. The terrorists are breaking the monopoly, which the capitalist state has over political violence; they are attacking the bourgeoisie with the means it has used itself for centuries in order to assure its privileges.

The ruling class knows perfectly well that its social order will less and less be able to provide the essentials of life for its slaves. It knows perfectly well that individual violence is a symptom of the crisis of society and that this very crisis provokes the increasing danger of the collective violence of the proletariat directed by a communist party and conscious of its aims.

Today the entire bourgeoisie is engaging in a class struggle from above on the international level, and moreover it is doing this with success. All violence not exercised by the capitalist state, its agents and its institutions is stigmatized as a crime and declared to be insane, reactionary and even “fascist”.

At the same time, the state shows in the most explicit way that any attempt against its social order will be met by pitiless repression. In short, it directs a widespread campaign of intimidation against the whole working class, against the only force, which can seriously threaten its state. Consequently it is only by utilizing violence in its different forms – open or latent – that the working class can defend its immediate interests. It is only through armed and organized violence that it can accomplish its historic task – the establishment of its own dictatorship to destroy this infamous society which is based only on violence and breeds only violence, and the opening of the way to a new social form without exploitation and thus without oppression. This is why the bourgeoisie does all it can to maintain intact the wall, which it has built between the working class and the weapon of violence. This is why it mobilizes all its forces in order to cry “Down With the Terrorists!”.

Just as any major symptom of the earthquakes, which are developing in the depths of this society, just as any serious and objective manifestation of the contradictions and the crisis of capitalism, present day terrorism has the merit of contributing to the clarification of fronts. In effect, such manifestations oblige each political organization to show where it stands and where it is going.

Faced with the terrorist actions, the bourgeoisie must openly admit in its daily practice that democracy is not able to dispel the contradictions, which this society inevitably breeds, other than by using open violence. This is what frightens the “conscious democrats”, but the bourgeoisie must require from its members as well as from its “clients” an unquestioned discipline and unequivocal words. Of course it obtains this. The liberal intellectuals even feel affronted to see the “right” doubt their loyalty.

The “personalities” and organizations of the “left”, who claim to represent the working class and the revolution, are no exceptions and reveal their true class colors. With more or less prudish airs they throw off the last fig leaf, revealing what side of the class line they are really on. The bourgeoisie tries to exploit the terrorist actions just as it does with each episode of rebellion against its order. It brazenly announces, “Because of the terrorists, I am obliged to oppress even more”. The “left” servilely repeats, “The terrorist actions only serve the right”.

In fact it is the “left” who does the greatest work to justify the growing repression. As the constitutional state shows more and more what it really is, the more it is clear what democratic rights are really worth,  the more the “left” tries to defend, and calls the workers to defend, the constitutional state and democratic rights. In the “best” case this “left” tries to bridge the gulf opened up by the terrorist attacks and bourgeois repression, and to throw a hypocritical veil over this general class polarization.

The revolutionary proletariat acts in a totally different way. Neither bourgeois reaction nor the desperate attempts to fight this reaction by commando actions can make it forget its principles. The class struggle is not conducted by means of legal rights and reforms but by all forms of violence; it does not lead to democracy but to the dictatorship of the proletariat which will utilize all forms of terror to break the resistance of the bourgeoisie.

Proletarians have no rights to lose in this society; they have only rights to violate in the collective struggle, and finally to destroy all right which presides over exploitation and oppression.

If the “personalities” and organizations have shown their true face, we must applaud this fact and not help them to put their mask back on. Far from erecting a bridge over the chasm which has opened up in society, it is necessary to deepen it and to aid the working masses to take their stand on the side to which history has summoned them, the side of revolutionary violence. This political cleavage is a condition for the awakening of the revolutionary class struggle, just as much as it is the play of objective forces which will push the working masses to rank themselves on their side of the class line.

The working class instead must resolutely oppose this collaboration. This is the only way we can prepare the conditions for the political and material arming of the proletariat and prevent it from submitting to the logic of the enemy.

Only in this way can we aid it to find once again its historical perspective defended by the communist party – the perspective of its collective class violence -and thereby enable it to accomplish its task. Only in this way can these heroic energies that are wasted today in individual violence be merged together and integrated as precious components of the collective class violence of the proletariat struggling for its emancipation. As Marx (nicknamed the “red terror doctor” by the bourgeoisie of the last century) proclaimed in his “Address to the Central Committee of the Communist League” in 1850:
“Far from opposing so-called excesses – instances of popular revenge against hated individuals or public buildings that are associated only with hateful recollections – such instances must not only be tolerated but the leadership of them taken in hand”.
As Communists we work for the return of the situation which will permit us to carry out this function.﻿