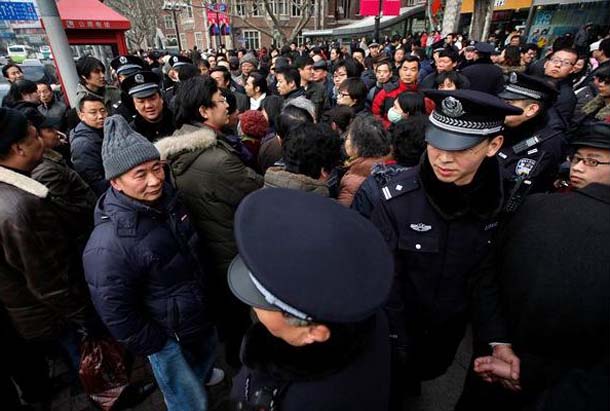 Around 300 civilians have gathered on March 15 outside the Intermediate Court of Wuhan, in China’s Hubei Province, to protest a lawsuit filed against a physically disabled man alleged to have killed one of five assailants who tried to forcibly evict his mother Zhou Houzhen from her apartment on August 1, 2010.

The man, identified as wheelchair-bound Zou Bin, is severely handicapped and had to use body language to communicate throughout the hearing, having lost his ability to talk to illness. It was alleged that Zou has been detained by authorities for the past 7 months, for defending his mother against a group of men who broke into her apartment building, and who after being refused entry to the apartment, waited for her outside and savagely beat her. Zou is accused of using a kitchen knife to defend his mother, killing one attacker and injuring another in the fray.

On the same day as the case against Mr. Zou, nearly a thousand angry residents rallied to protest a mass forced eviction in Wuhan’s Qiaoku district, carrying banners reading ‘Return My Home to me’ and ‘Stop Violating our Residency Rights’, as well as propane tanks to ward off police forces, who were later accused by government agents of not doing enough to ‘protect the interests of the party’.

According to a report from The Epoch Times, the evictions were the result of Wuhan City Party Committee Secretary Ruan Chengfa handing over a development project to the relatives of an old friend who had helped him obtain his position as Secretary, with residents being evicted without official documentation.