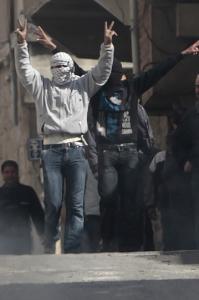 15 dead in clashes in southern Syria

At least six were killed in the early morning attack on the al-Omari mosque in the southern agricultural city of Daraa, where protesters have taken to the streets in calls for changes and political freedoms, witnesses said. An activist in contact with people in Daraa said police shot another three people protesting in its Roman-era city center after dusk. Six more bodies were found later in the day, the activist said.

Inspired by the wave of prodemocracy protests around the region, the uprising in Daraa and at least four nearby villages has become the biggest domestic challenge since the 1970s to the Syrian government, one of the most repressive in the Middle East. Security forces have responded with water cannon, tear gas, rubber bullets, and live ammunition. The total death toll stands at 22.

As the casualties mounted, people from the nearby villages of Inkhil, Jasim, Khirbet Ghazaleh, and al-Harrah tried to march on Daraa last night, but security forces opened fire as they approached, the activist said. It was not immediately clear if there were more deaths or injuries.

Democracy activists used social-networking websites to call for massive demonstrations across the country tomorrow, a day that they dubbed “Dignity Friday.’’

A US State Department spokesman, Mark Toner, said in a statement that Washington was alarmed by the violence and “deeply concerned by the Syrian government’s use of violence, intimidation, and arbitrary arrests to hinder the ability of its people to freely exercise their universal rights.’’

Heavy shooting rattled Daraa throughout the day, and an Associated Press reporter in the city heard bursts of semi-automatic gunfire echoing in its old center in the early afternoon.
http://www.boston.com/news/world/middleeast/articles/2011/03/24/15_dead_in_clashes_in_southern_syria/