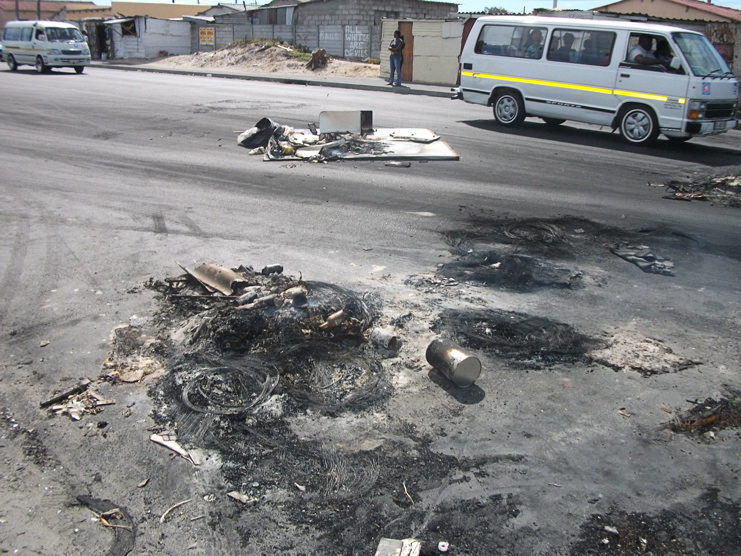 Residents of the Makhaza 37 Section B informal settlement have been on the rampage since Saturday.Every evening hundreds of residents have been scattering rubbish over the roads and burning tyres in a protest over the lack of electricity in the area. Last night a group of residents burnt Metrorail signal cables near the Chris Hani station, disrupting trains at the end of the Khayelitsha line.

The protest was sparked when a six-year-old girl was badly shocked by a live wire from an illegal connection on Saturday.

The young girl, one of many whom residents say are regularly shocked or electrocuted from illegal connections in the area, spent a number of days being treated in hospital.

The residents have had enough. They say they want the City of Cape Town and Eskom to provide electricity to their area.

They say four weeks ago the city promised that electricity would soon be provided, but they are still waiting.

They have also vowed not to vote in the upcoming local government elections if they do not get power.

Resident Luvuyo Konti, 19, said: “Since last year more than ten kids have died here because of electric shocks. Our government knows that but they keep on giving us empty promises. Enough is enough we want electricity and the strike is continuing until we get it.”

A resident who did not want to be named said her child died in front of her two months ago after being shocked by an illegal connection.

“He was playing with his friend. An electric wire fell and he was shocked. I couldn’t blame anyone because we all using this illegal electricity.”

But she said if electricity had been provided to the settlement her boy would still be alive.

“Government must do something. We want electricity.”

Residents’ Committee member Whitey Ngoniwe said a meeting was held with City of Cape Town officials four weeks ago where the city promised to provide electricity.

“But nothing has happened. They want us to look … like liars. We’ve been giving residents empty promises, that’s why people are protesting. They (residents) see us as liars and I don’t blame them,” said Ngoniwe.

Questioned about the promises made by the City, ward councilor Nolufefe Gexa said the promises had been made by Democratic Alliance Member of Parliament Malizole Mnqasela.

But Mnqasela said the protests had been stirred up by the ANC Youth League (ANCYL) to make the DA “look bad”.

“ANCYL has nothing to do with what is happening in Makhaza. Whoever said that from the DA has no proof,” said Nkohla.

However, Singh said a sub-station had recently been built in the area on land provided by the city.

But Eskom provincial spokesperson Jolene Henn, said she did not know about any protests over electricity provision. “As Eskom we were not informed,” said Henn.

Police spokesperson Nosiphiwo Mtengwana confirmed the ongoing protests in the area but said no arrests have been made.

This entry was posted in resistance and tagged energy, social tension, south africa. Bookmark the permalink.