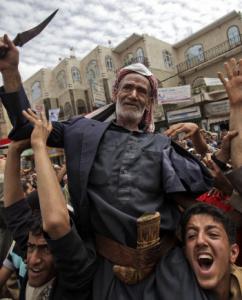 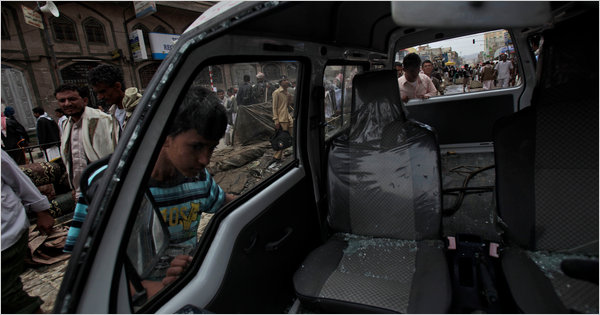 The impoverished Arabian Peninsula state has been rocked by weeks of demonstrations that have undermined Saleh’s 32-year grip on power, with both pro- and anti-government supporters appearing to resort increasingly to violence in the struggle.

Seven demonstrators and three soldiers have died in clashes since Saturday, raising the death toll from unrest above 30.

The United States, which has long seen Saleh as a bulwark against a dynamic al Qaeda wing based in Yemen, has condemned the bloodshed and backed the right for peaceful protest, but has insisted only dialogue can end the political crisis.

Fighting intensified after protesters stormed a municipal building. Security forces fired on them, wounding 10, but could not stop them seizing the building, a local official said.

In the central Maarib province, where several oil and gas fields of international companies are located, a man stabbed governor Naji Zayedi, critically wounding him as he and police tried to break up a crowd of thousands at a sit-in.

“Members of the opposition stabbed the governor and wounded three others as security tried to stop protesters from inciting chaos,” a local official said.

As tensions in Yemen rose, three journalists and a researcher from Britain and the United States were abruptly deported Monday. An airport official said they had all entered on tourist visas and were not entitled to work there.

This entry was posted in resistance and tagged repression, riot, social tension, yemen. Bookmark the permalink.