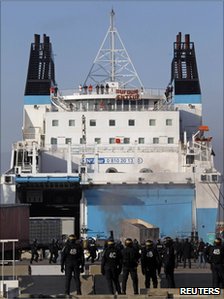 A large force of CRS riot police in the French city of Marseille has broken up a month-long strike by ferry workers protesting against planned cuts.

They arrested 14 strikers who were blockading the Mediterranean city’s port in protest at plans to reduce summer crossings from Nice to Corsica.

Strikers fought back by spraying police with water hoses.

Trade unionists accused the CRS of heavy-handed tactics against the demonstrators.

“They were arrested and handcuffed like thugs, which is unacceptable,” said Frederic Alpozzo of the CGT/Marins union.

Protesters had commandeered lifeboats and strung rope and nets across the port’s entrance, disrupting maritime traffic.

The strikers from the ferry company Societe Nationale Maritime Corse Mediterranee (SNCM) want the total number of ferries to remain the same.

They fear that jobs will go if services are cut.

Talks with ferry company managers at the weekend ended without any result, they said.