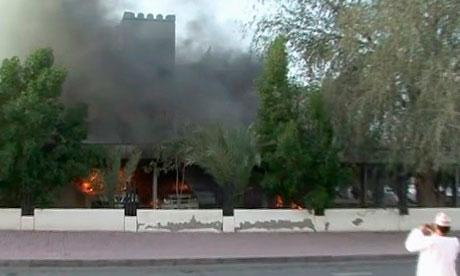 “It’s a free for all,” said one man who watched while people grabbed all they could find — from food to metal sheets and electronic goods — and piled their hauls into trolleys at the Lulu Hypermarket at a road junction in the port of Sohar.

The looting followed protests on Sunday night when Omanis demanding jobs and political reforms clashed with police, throwing stones and setting government buildings and part of the market ablaze. A doctor said six people died in the clashes, although the health minister said only one person had died.

All afternoon, women walked in and out of the supermarket taking away food and drinks. One was seen stacking up slightly burned cartons of eggs, powdered milk, orange juice and cream cheese on her trolley and calmly leaving the supermarket.

“There’s no security…..I want to live,” said a 28-year-old Omani, who identified himself as Youssef, walking away with 10 bottles of juice in his long traditional Arab robe.

Another man dragged a big sheet of aluminium, loading it onto a trolley of food and walking off from the supermarket, next to the Globe Roundabout on the main road linking the capital Muscat to northern Oman.

Security forces and police were nowhere to be seen.

Plumes of smoke emanated from the destroyed portion of the store on Monday morning, and three fire engines sprayed water to douse a small part of the store that was still burning at noon.

Protesters in Sohar are demanding political reform and an end to unemployment in the oil-producing country, ruled for the past four decades by Sultan Qaboos bin Said. As more people gathered at the Globe Roundabout, some called for an end to the looting.

“Yes, yes to reform. No, no to looting,” a group of about 200 Omanis chanted as they marched around the area.

Not everyone adhered to the call. “Yes, yes to looting,” one man said as he walked into the supermarket.

“This style is not good,” said Ahmed Rashid Saeed al Mukbari, a 27-year old Omani, watching the looters helplessly. “If they want change, they should demand it but not do this.”

The five-year old supermarket will remain closed until calm returns to the country, according to the firm that runs it.

“We will wait for things to cool down,” said Yousuffali Abdul Khader, managing director of the Lulu Hypermarket chain, who is based in the United Arab Emirates. He said the store employed about 300 Omanis and 200 expatriates.

This entry was posted in resistance and tagged oman, repression, riot, social tension. Bookmark the permalink.