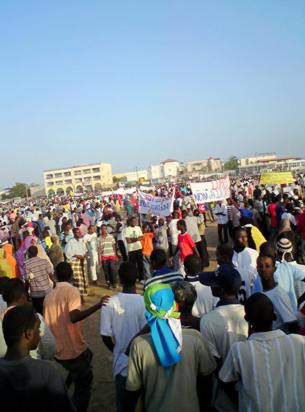 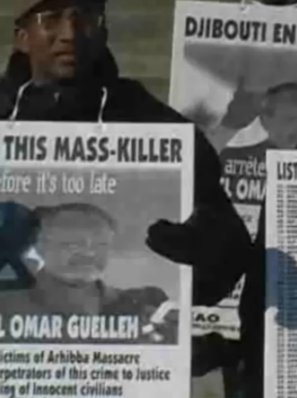 afrol News, 27 February – The planned resumption of mass protests in Djibouti this weekend was hindered by massive police presence in the capital and arrests of about 300 opposition and civil society leaders.

Friday 18 February saw an estimated 30,000 Djiboutians protesting in central Djibouti City. Their main demand was for President Ismaïl Omar Guelleh to step down, or at least refrain from standing candidate in the upcoming April elections.

A united Djiboutian opposition, supported by civil society and human rights groups, says President Guelleh’s third term bid is unconstitutional. The regime only last year changed the constitution, removing the two-term limit, but this was done by a parliament without opposition members. The opposition boycotted the 2005 and 2008 polls as their demands for fair elections were not met.

At least two persons were killed and tens injured as police used live ammunition and teargas against the protesters. A large number of arrests were made during the night.

The day after, UAD leader Ismaël Guedi Hared and two other main opposition leaders were detained, but released on the next day. The highly-profiled leader of Djibouti’s human rights league (LDDH), Jean-Paul Noël Abdi, was arrested even before the protests, and released to house arrest only this week.

While the main leaders of the opposition now are partially free, but under constant surveillance, Djiboutian police during the week has engaged in the “arbitrary arrest” of “more than 300 persons,” according to the Djiboutian human rights group ORDHD, giving detailed information about the prisoners’ whereabouts.

“According to several sources, several of [the detained] were tortured at the premises of the gendarmerie,” an ORDHD statement says. People had been arrested both during the 18 February protests and “at their homes,” the group added.

Many key organisers of the protests are among the arrested, affecting the planning of the announced second protest march, planned for Friday 25 February. Also, reports from Djibouti City agree on a massive presence of armed police in the city during the entire week; peaking on Friday.

According to some opposition members, there were indeed attempts of groups of protesters to move into central Djibouti City on Friday, but the groups were turned back by armed police. This information is however not verified.

According to Bourhan Mohammed Ali, leader of the minor Djiboutian PRIDE opposition group, the failure of the planned 25 February protests were mostly due to the large-scale arrests. The detained opposition figures, key in organising the protests, were to hold a rally on Thursday, 24 February, to motivate the masses and to outline the plans for the following day.

As these organisers failed to show up – mostly being imprisoned – this “broke the momentum of the masses,” according to Mr Bourhan, as it “cast doubt in their minds” about the protest movement.

Further, after the failure of the rally, a message was sent out, saying the mass protests would be postponed. “The entire opposition – individuals and movements – has decided to organise the second official protest on 4 March,” the message said.

Mr Bourhan however condemned this statement as “misinformation” by an unknown “self-appointed spokesman” of the protest movement. He is now calling for improved coordination by opposition groups to assure a return of momentum for the Djibouti protest movement. The calls for a massive protest on Friday 4 March are however still on.