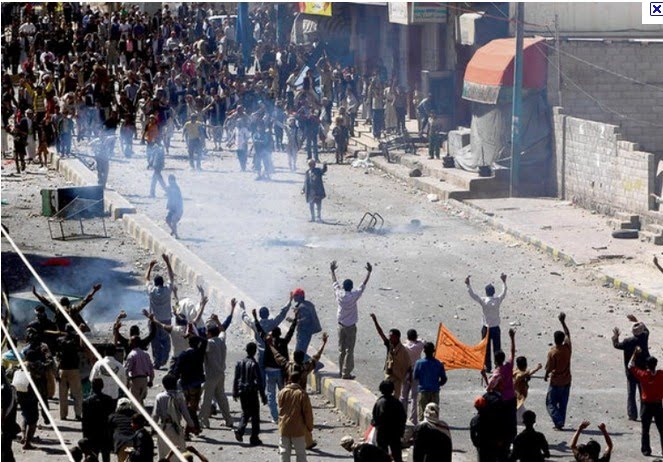 ON THE EGYPTIAN-LIBYAN BORDER: Its target may be proving more defiant than either Zine El Abidine Ben Ali or Hosni Mubarak. Its outcome may pivot far more around the ebb and flow of tribal alliances than divisions in the military.

Still, the revolt in Libya shares one catalyst in common with the uprisings that spread through Tunisia and Egypt with lightning speed: youth.

As much as anything, the longstanding frustrations and thwarted aspirations of Libya’s young are fuelling the uprising that threatens the regime of Col Muammar Qaddafi.

Libyans like Ali, 26, say they are sick and tired of living under the cloud of defeat and regret they have inherited.

Because of their opposition to Col Qaddafi’s regime, Ali’s parents were forced to flee years ago to the United States, where he was born and raised. Now he is now organising convoys to ship humanitarian aid to Libya.

“We grew up listening to the stories of our parents trying to change the situation, and failing,” said Ali, who refused to provide his real name for fear of retaliation.

Inspired by recent events in Tunisia and Egypt, Libya’s young are now uniquely placed to fulfil the dreams of their elders, he said. They have travelled abroad, and they are more open to the world thanks to social media networks and satellite television. Squeezed between the authority of the Qaddafi regime and the traditional sway of Libya’s tribes, they are fed up with the status quo and keen to make their mark.

For any observer of Egypt and the rest of the Middle East, the motives driving the dissent of Libya’s young have a familiar ring, said Dirk Vanderwalle, a professor of government at Dartmouth College in the United States and an expert on Libya.

“The problems of the youth in Egypt and Libya are exactly the same,” Mr Vanderwalle said. “They do not even have the money to get married and make a family. The economic issues though are not prevalent here. The youth took to the streets because they do not have a say in the political life of the country.”

Geography and tradition are key factors in Libya’s uprising, too.

In Cyrenaica, an eastern coastal region of Libya that has a long history of opposing the central government, violence between pro- and anti-Qaddafi forces, has been particularly fierce.

The eastern city of Benghazi, now in the hands of Qaddafi opponents, is the heartland of the Senoussi royal family, which ruled the country before Mr Qaddafi took power in 1969. It was also in Benghazi that Libya’s national hero, Omar Mukhtar, led the resistance to Italy’s invasion of Libya in 1912 until he was captured an hanged by Italian forces 19 years later.

Nevertheless, it is the frustration of Libya’s young with Mr Qaddafi’s stranglehold over politics – as well as his focusing of government largesse on his strongholds in the west at the expense of the east – that appears to be driving events in the North African nation.

Inside the country, they are toiling day and night to inform the outside world about what is happening in Libya. Outside, they are collecting and shipping emergency aid for cities in the eastern half of the country.

“People from all over the world are donating big amounts of money to help us,” said Ousama Abu Shagur, 31, who lives in Dubai. Together with a group of friends, and with the help of websites such as 17th February, Mr Shagur has been helping deliver medicine, blood and food to Libya.

If the Qaddafi regime should fall, Mr Shagur and other young Libyans will be a force to be reckoned with. Thomas Hüsken, a social anthropologist at Germany’s University of Bayreuth and an expert on Libyan tribes, said: “The shabab al thawra – the revolutionary youth – are becoming an organised presence. They represent now a big challenge for the tribal authorities.”