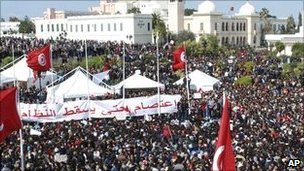 TUNIS — Security forces in the Tunisian capital fired tear gas Saturday to disperse about 300 protesters chanting anti-government slogans at a fresh protest outside the interior ministry, an AFP reporter said.

The protest followed clashes between police and protesters at the same location on Friday that the ministry said left 21 police officers injured and three police stations damaged.

Large numbers of police moved quickly to disperse Saturday’s protest and men in civilian clothes and masks, armed with clubs, were seen moving through the streets searching for protesters.

Police made several arrests in the city centre.

“Go home… I’ll show you what democracy is,” one of the police officers was heard shouting through a cloud of tear gas.

Tens of thousands of protesters had taken to the streets on Friday demanding the resignation of the country’s interim prime minister, who was part of the regime of ousted president Zine El Abidine Ben Ali.

The interior ministry said in a statement that three police stations had been partially burned or ransacked during Friday’s clashes.

Blaming Friday’s unrest on young people and students, the ministry said in a statement: “We call on parents to discourage their children from participating in this type of demonstration, to encourage them to return to classes and to do everything to avoid that they serve as human shields for groups of trouble-makers.”

In response to growing protests, Prime Minister Mohamed Ghannouchi’s government announced Friday that it will hold elections by mid-July.

On Friday an estimated 100,000 protesters marched down the capital’s main avenue shouting “Ghannouchi Leave” and “Revolution Until Victory.”

It was the biggest of several rallies against the transitional authority since the fall of long-time ruler Ben Ali on January 14 following weeks of demonstrations.

One protester, a 22-year-old man, was hurt when police fired dozens of warning shots to prevent demonstrators attempting to climb into the interior ministry through its windows, a witness told AFP.

Ghannouchi’s caretaker government, established on January 17 and tasked with leading Tunisia to elections, has faced regular protests demanding it root out vestiges of the old regime.