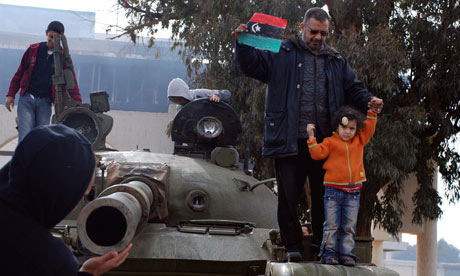 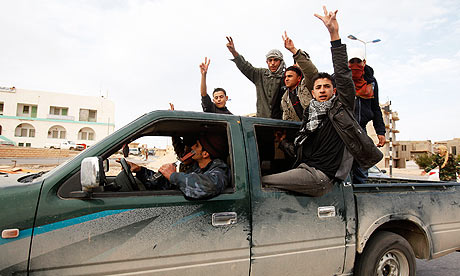 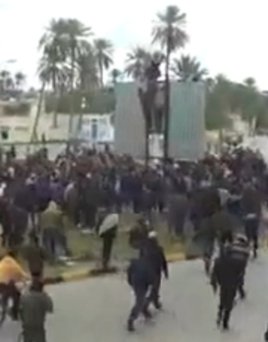 BENGHAZI, Libya – Government forces shot dead two protesters in the Libyan capital Tripoli on Friday, Al Jazeera television reported, as a popular uprising against Moammar Gadhafi closed in on his main power base.

Pro-Gaddafi forces opened fire after hundreds of people in the Janzour district in western Tripoli started a protest march after Friday prayers, a resident, who asked not to be identified, told Reuters in an email.

He said protesters were also shouting anti-Gaddafi slogans in Fashloum in the city’s east, and another resident said security forces had fired into the air there.

Tripoli and the surrounding area, where Gaddafi’s forces had managed to stifle earlier protests, appear to be his last main stronghold as the revolt that has put the east under rebel control has also reportedly advanced through the west.

Zawiyah, an oil refining town on the main coastal highway 50 km (30 miles) west of Tripoli, has on successive nights fought off attempts by government forces to take control, said witnesses who fled across the Tunisian border at Ras Jdir. “There are corpses everywhere . . . It’s a war in the true sense of the word,” said Akila Jmaa, who crossed into Tunisia on Friday after travelling from the town.

Saeed Mustafa, who also drove through the town, said:

“There are army and police checkpoints around Zawiyah but there is no presence inside.”

Army and police in the eastern city of Adjabiya told Al Jazeera television they had gone over to the opposition.

Other reports say the third city, Misrata, 200 km east of Tripoli, is also under rebel control. Such reports are hard to verify, with foreign correspondents unable to travel around western Libya, and telephone and broadband connections poor.

But Gaddafi’s son Saif al-Islam said the government was in control of the west, south and centre, and that his family had no intention of leaving.

People in Benghazi, under rebel control, said friends in Tripoli had told them protesters had demonstrated at mosques throughout Tripoli and planned to converge on Green Square.

“At around 14:10 pm (1210 GMT), hundreds of protesters at the Slatnah Mosque in the Shargia district of Janzour were chanting anti-Gaddafi slogans, such as ‘With our souls, with our blood we protect Benghazi!’,” the Tripoli resident said.

Hadar, a businessman who declined to give his full name, told Reuters by telephone: “I saw two men fall down and someone told me they were shot in the head.”

Ali, another businessman who declined to give his full name, told Reuters by phone that he was standing with a crowd near a mosque on a road leading to Green Square.

“They just started shooting people. People are being killed by snipers but I don’t know how many are dead,” he said.

UN High Commissioner for Human Rights Navi Pillay said “thousands” may have been killed or injured by Gaddafi’s forces in the uprising, and called for international intervention to protect civilians.

The rebels who have seized Libya’s east said they controlled almost all oil facilities east of the Ras Lanuf terminal. A Reuters reporter saw that the other main terminal, Marsa el Brega, was in rebel control, with soldiers securing the port.

Prosecutor-general Abdul-Rahman al-Abbar became the latest senior official to resign, and told al Arabiya television he was joining the opposition.

In the first practical attempt to enrol the support of Libya’s 6 million citizens since the uprising began, state television announced the government was raising wages and food subsidies and ordering special allowances for all families.

Gaddafi’s four decades of totalitarian rule have stifled any organized opposition or rival political structures, but in the east, ad hoc committees of lawyers, doctors, tribal elders and soldiers appeared to be filling the vacuum left by Gaddafi’s government with some succcess.

There was little sign of the radical Islamists whom Gaddafi has accused of fomenting the unrest.

The turmoil, inspired by successful revolutions in neighbouring Tunisia and Egypt, has caused particular global concern because Libya supplies 2 per cent of the world’s oil, the bulk of it from wells and supply terminals in the east.

Abdessalam Najib, a petroleum engineer at the Libyan company Agico and a member of the Feb 17. coalition that says it is running Benghazi on an interim basis, said the rebels controlled nearly all oilfields east of Ras Lanuf.

But industry sources told Reuters that crude oil shipments from Libya, the world’s 12th-largest exporter, had all but stopped because of reduced production, a lack of staff at ports and security concerns. Benchmark Brent oil futures were steady at around $111 on Friday, after a Saudi assurance that it would replace any shortfall in Libyan output brought prices back from Thursday’s peak of nearly $120.

The UN Security Council was to meet on Friday to discuss a French-British proposal for sanctions against Libyan leaders, although a vote is not likely until next week.

French Foreign Minister Michele Alliot-Marie said the draft would ask for an arms embargo, financial sanctions and a request to the International Criminal Court to indict Libyan leaders.

A German diplomatic source said the European Union was likely to agree its own sanctions early next week. Switzerland said it was freezing any assets owned by the Gaddafi family.

Foreign governments mostly focused on evacuating thousands of their citizens trapped by the unrest.

Chinese official media said Beijing had so far evacuated 12,000, or about one third, of its citizens from Libya. A U.S.-chartered ferry that had been trapped in Tripoli for two days by bad weather finally set off for Malta. Britain said it was sending a naval destroyer and drawing up plans to pull out British oil workers stranded in desert camps.

Gaddafi appealed for calm on Thursday in a telephone call to state television, blaming the revolt on al-Qaida leader Osama bin Laden.

State television said on Friday that each family would get 500 Libyan dinars ($400) to help cover higher food costs, and wages for some public sector workers would rise by 150 per cent.

Gaddafi’s grip on power could depend in part on the performance around Tripoli of an elite military unit led by one of his younger sons, U.S. and European officials and secret diplomatic cables obtained by Wikileaks showed.

The 32nd Brigade, led by Gaddafi’s son Khamees, is one of three last-ditch “regime protection units” totalling 10,000 men. They are better equipped and more loyal than the rest of the military, which has seen heavy desertion, officials said. A witness told Reuters the unit had attacked anti-government militias controlling Misrata, although residents said the forces were beaten back by lightly armed local people.