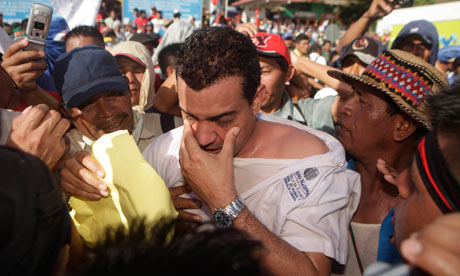 Demonstrations are spreading across Panama demanding an end to plans to reform mining laws in order to attract foreign investors. Thousands of indigenous people this month blocked the Pan-American highway at San Félix, 400km west of Panama City.

Some had walked for several days from villages in the indigenous Ngöbe-Buglé region, which has large copper reserves. Brandishing signs condemning open-cast mining, they were joined by environmental campaigners. “This is a peaceful demonstration against reform of the mining law,” said Rogelio Moreno, the leader of the Ngöbe-Buglé people.

In the capital, students stopped traffic on a major thoroughfare. More demonstrations are planned.

President Ricardo Martinelli approved the new law this month. It changes rules in force since 1963. Parliament, controlled by rightwing parties belonging to the presidential majority, passed the law on 10 February. Advocates of the legislation point out that it increases the royalties paid by mining companies from 2% to 5% and raises environmental standards.

The Cerro Colorado mine, on Ngöbe-Buglé territory, is thought to contain one of the world’s largest copper reserves.