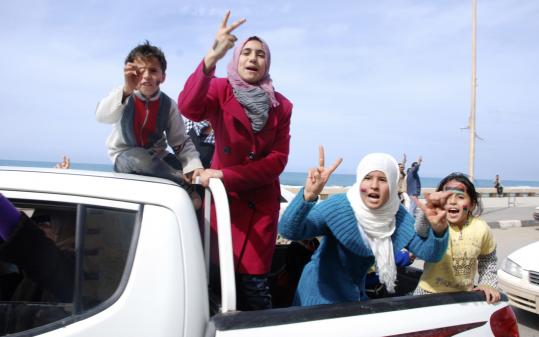 CAIRO — The faltering government of Libyan strongman Moammar Khadafy struck back at mounting protests against his 40-year rule, as security forces and militiamen backed by helicopters and warplanes besieged parts of the capital yesterday, according to witnesses and news reports from Tripoli.

By last night, witnesses said, the streets of the capital, Tripoli, were thick with special forces loyal to Khadafy as well as mercenaries. They shot freely as planes dropped what witnesses described as small bombs and helicopters fired on protesters.

Hundreds of Khadafy supporters took over Green Square after truckloads of militiamen arrived and opened fire on protesters, scattering them from the square. Residents said they now feared even to emerge from their houses.

“It was an obscene amount of gunfire,’’ said the witness. “They were strafing these people. People were running in every direction.’’

The police stood by and watched, the witness said, as the militiamen, still shooting, chased protesters.

The escalation of the conflict came after six days of revolt that began in Libya’s second-largest city, Benghazi, where hundreds of people were killed in clashes with security forces, according to witnesses. Human rights activists outside the country said they had confirmed more than 220 deaths.

The rebellion is the latest and bloodiest so far of the uprisings that have swept the Arab world with surprising speed in recent weeks, toppling autocrats in Egypt and Tunisia, and challenging others in Bahrain and Yemen.

The day had begun with growing signs that Khadafy’s grip on power might be slipping, with protesters in control of Libya’s second-largest city, his security forces pulled back to key locations in the capital as government buildings smoldered, and a growing number of officials and military personnel defecting to join the revolt.

But the violence Khadafy unleashed yesterday afternoon on Tripoli demonstrated that he was willing to shed far more blood than the deposed rulers of either neighboring Egypt or Tunisia in his effort to hold on to power.

Two residents said planes had been landing for 10 days, ferrying mercenaries from African countries to an air base in Tripoli. The mercenaries had done much of the shooting, which began Sunday night, they said. Some forces were using particularly lethal, hollow-point bullets, they said.

“The shooting is not designed to disperse the protesters,’’ said one resident, who wanted to be identified only as Waleed, fearing for his security. “It is meant to kill them.’’

“This man has no sense of humanity,’’ he said.

Khadafy, for his part, remained largely out of sight. Around 2 a.m. today, after a rainy day, he appeared on state television for about 30 seconds, holding an umbrella up through the open door of a passenger car. He denied rumors that he had fled to Venezuela and called the cable news channels covering Libya “dogs.’’

As rioters overwhelmed the streets around 1 a.m. yesterday, Khadafy’s son Seif al-Islam Khadafy delivered a rambling but bellicose speech threatening Libyans with the prospect of civil war and “rivers of blood’’ if they turned away from his father.

Apparently enraged by the speech, protesters converged on Green Square soon after and clashed with heavily armed riot police officers for several hours, witnesses in Tripoli said by telephone.

By dawn in Tripoli, police stations and government buildings were in flames. Debris fires from the rioting the night before burned at many intersections.

Most stores and schools in Tripoli were closed, and long lines were forming for a chance to buy bread or gas. Protesters had torn down or burned the posters of Khadafy that were once ubiquitous, witnesses said.

To the east, protesters in control of Benghazi flew an independence flag over the rooftop of the courthouse and displayed the scene online in a video. A crowd celebrated what they called “the fall of the regime in their city.’’

“We have liberated the east areas,’’ said Fathi Terbil, a prominent opposition lawyer in Benghazi, over a live, online stream that he calls the Free Libya Radio. “We are liberating, we are not overtaking. Now we need to go to Tripoli and liberate Tripoli.’’

Protesters issued a list of demands calling for a secular interim government led by the army in cooperation with a council of Libyan tribes.

In a sign of growing cracks within the government, several senior officials broke with Khadafy. The Quryna newspaper reported that the justice minister had resigned in protest over the deadly response to the demonstrations.

“He has to stop killing the Libyan people,’’ the deputy ambassador, Ibrahim Dabbashi, said.

He urged other nations to join in that request, saying he feared there could be a large-scale massacre in Tripoli and calling on African nations to stop sending what he called mercenaries to fight on behalf of Khadafy’s government.

Dabbashi said he had not seen the Libyan ambassador since Friday and did not know whether he shared the opinion of many in his mission. But, Dabbashi said, the UN mission represents the people, not Khadafy.

Abdel Monem al-Howni, Libya’s representative to the Arab League, also resigned. “I no longer have any links to this regime, which lost all legitimacy,’’ he said in a statement reported by news agencies. He called what is happening in Libya “genocide.’’

Al Manara, an opposition website, reported that a senior military official in Benghazi, Colonel Abdel Fattah Younes, resigned, and the newspaper Asharq al-Awsat reported that Khadafy had ordered that one of his top generals, Abu Bakr Younes, be put under house arrest after disobeying an order to use force against protesters.

The Libyan government has tried to impose a blackout on information from the country. Foreign journalists cannot enter. Internet access has been almost totally severed, though some protesters appear to be using satellite connections. Much news about what is going on came from telephone interviews with people inside the country.

The United States ordered all nonessential personnel and family members at its embassy to leave the country.

Several foreign oil and gas companies were moving to evacuate some workers as well. The Quryna newspaper said that protests have occurred in Ras Lanuf, an oil town where some workers were being assembled to defend a refinery complex from attacks.

Meanwhile, Libyans from Benghazi and Misrata were reported to be heading to Tripoli to join the battle against the government forces, said Mansour O. El-Kikhia, a professor of Middle East studies at the University of Texas, Austin, who had talked to people inside the country.

“There are dead on the streets, you cannot even pick them up,’’ he said by e-mail. “The army is just shooting at everybody. That has not deterred the people from continuing.’’

Though the outcome of the battle is impossible to determine, some protesters said the bloodshed in Tripoli only redoubled their determination.

“He will never let go of his power,’’ said one, Abdel Rahman. “This is a dictator, an emperor. He will die before he gives an inch. But we are no longer afraid. We are ready to die after what we have seen.’’