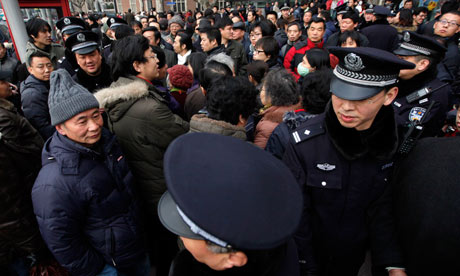 Chinese security officials have questioned or detained scores of activists and warned others against staging protests after an online call was made for demonstrations in 13 cities, campaigners said.

The message – posted on an overseas website on Saturday – was titled “The jasmine revolution in China”.

The swift crackdown underlined the anxiety of authorities in the wake of the Egypt uprising and protests across the Middle East.

The Xinhua state news agency said the meeting in Beijing was to help leaders to understand “new changes and characteristics in the domestic and international situations”.

Despite a huge police presence at the proposed demonstration locations, there were signs that at least a handful of people in Beijing and Shanghai had hoped to protest.

It is not clear who posted the call for demonstrations on the Boxun website, and the message may well have come from abroad. Many mainland activists appeared to have been unaware of it until police contacted them.

The message posted said: “You and I are Chinese people who will still have a dream for the future … we must act responsibly for the future of our descendants.”

It urged people to shout demands for food, work, housing and fairness.

The Hong Kong-based Information Centre for Human Rights and Democracy estimated that more than 100 activists across the country were taken away by police, prevented from leaving home or were missing.

Wang Songlian, of the Chinese Human Rights Defenders network, said more than 40 campaigners or dissidents had been summoned or questioned by police or placed under “soft detention” at home or elsewhere.

In many more cases, police had visited people to ask them what they were doing or warn them not to take part, she said.

“[The message] linked it to the jasmine revolution and I guess that made the government nervous,” she added. “It really shows us how much the government has identified with regimes in the middle east where people are so aggrieved about social injustice.”

She added that the disappearance of some individuals, such as the lawyer Jiang Tianyong, might be linked to attempts to support the legal activist Chen Guangcheng rather than the call for protests.

In Beijing, security officers attempted to detain one man holding jasmine flowers at the planned protest site, but let him go after he was swarmed by journalists.

The Associated Press named him as 25-year-old Liu Xiaobai, who told them: “I just put down some white flowers, what’s wrong with that? I’m just a normal citizen and I just want peace.”

Other witnesses said he had picked the flowers out of a rubbish bin a few moments before.

Officers also took away two other people, one of whom was shouting, although it was not clear whether they were protestors.

One bystander said: “I was here for the demonstration, but there were so many police.

“There’s no freedom, and the government don’t care about us ordinary people. But what can you do?”

Another said: “It didn’t work. But it will happen. Maybe you have to look 10 years out in the future, but it will.”

But the majority of the large crowd appeared to be curious shoppers attracted by the large police and media presence.

Unusually, Xinhua reported that police had detained three people after crowds gathered at the People’s Square in Shanghai.

China’s most popular microblog blocked searches for “jasmine” and attempts to include the word in status updates on a social networking site were greeted with a warning to refrain from inappropriate postings.

The rights lawyer Pu Zhiqiang, who said he was being followed, said: “I personally think it’s difficult to change a government in China.

“But today’s gathering shows some changes in our society and also builds and strengthens people’s minds. It doesn’t help if the government controls some dissidents, because this gathering is self-organiaed.

“But I hope both protesters and police are peaceful. It’s very important to be legal.”

Nicholas Bequelin, the Asia researcher for Human Rights Watch, said: “I think it is significant, not in terms of whether it is going to topple the political system, but in indicating China is not immune from larger global trends about the impact of new communications on people’s aspirations.”

He pointed out that while there were a lot of protests in China, most related to specific grievances.

But Li Jinsong, a rights lawyer, told AFP he did not believe the call had been serious.

“By taking this so seriously, police are showing how concerned they are that the jasmine revolution could influence China’s social stability,” he said.