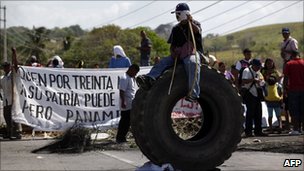 Police in Panama have clashed with dozens of indigenous protesters trying to prevent copper mining on their ancestral lands.

Members of the Guaymi indigenous group occupied a bridge on a major highway on the outskirts of Panama City.

Clashes erupted when police tried to move the protesters to clear the way for traffic.

Police say demonstrators, some of whom were armed with spears, threw stones at them when they tried to clear the section of the Pan-American highway.

Indigenous leaders complained that police had used tear gas against women and children.

The Guaymi say the new law would spoil pristine rainforest areas and force their communities to relocate.

The government has already opened for tenders a copper deposit in Cerro Colorado, in Ngobe-Bugle territory.

But President Ricardo Martinelli insisted that “no mining concession or exploitation will be made in a district in any area” of indigenous lands.

On Tuesday, riot police clashed with students who were also protesting against the changes.