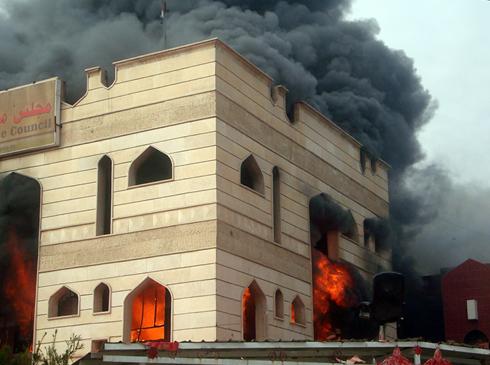 BAGHDAD (AP) — About 2,000 demonstrators attacked government offices in a southern Iraqi province, ripping up pavement stones to hurl at a regional council headquarters in a protest over shoddy public services, a provincial spokeswoman said.

The demonstration was among the most dramatic since Iraqis began venting their anger about dysfunctional government at all levels in relatively small protests across the country — an echo of the tumult happening across the Arab world. Unlike protesters in other countries demanding democracy or regime change, however, demonstrators in Iraq have focused on unemployment, lack of electricity and corruption.

The top medical official in the province, Diaa al-Aboudi, said 49 people were wounded in the protests in Kut, 100 miles (160 kilometers) southeast of Baghdad, including three critically. It was not clear how they were injured.

Protesters threw stones at the provincial council headquarters, set a trailer outside the building on fire and rushed inside the compound, said a spokeswoman for Wasit province, Sondos al-Dahabi said.

Television footage obtained by The Associated Press showed billows of smoke, a palm tree on fire and protesters, many of them teenagers, filling the headquarters compound. The sound of gunshots could be heard and demonstrators could be seen riding on a commandeered police truck and armored personnel carrier, waving Iraqi flags.

Flames could be seen coming from some of the offices, and protesters ripped up pavement stones to use as weapons to throw at the government building.

According to the spokeswoman, the demonstrators tried to set fire to the governor’s house, which was empty at the time. It was not clear whether the house was damaged.

Iraq is one of the few countries with a democratically elected government in the Middle East but leaders here have not been immune from the anger engulfing the region. Iraqis have a long list of grievances against their leaders including electricity that sometimes works only a few hours a day, unemployment that runs as high as 30%, and rampant corruption.

As security has improved in the country following the violence of 2006 and 2007, attention has turned to quality of life and economic issues instead. Wasit is a mostly Shiite area that borders Iran and is one of Iraq’s poorest provinces.

“We are here to demand electricity and better services. It is us who brought the governor and other officials to office through the provincial elections, but in return we got nothing from them,” said Hassan Ali Murwah, one of the protesters. “We will repeat such protests, and no force on earth can stand against us.”

Iraqi leaders eager to prevent a repeat of the scenarios played out in Egypt or Tunisia have tried to portray themselves as responding to protesters’ demands. Earlier this week, Iraq announced that it would delay the purchase of 18 F-16 fighters jets from the United States and instead would use the money to improve food rations for the country’s neediest people.

Iraqi Prime Minister Nouri al-Maliki has said that his government is improving the electricity situation but warned that there are no easy fixes to the problems troubling the nation.

Last week, the government announced that it would reduce electricity tariffs for Iraqis and will offer the first 1,000 kilowatts of electricity for free.

This entry was posted in resistance and tagged iraq, repression, riot, social tension. Bookmark the permalink.