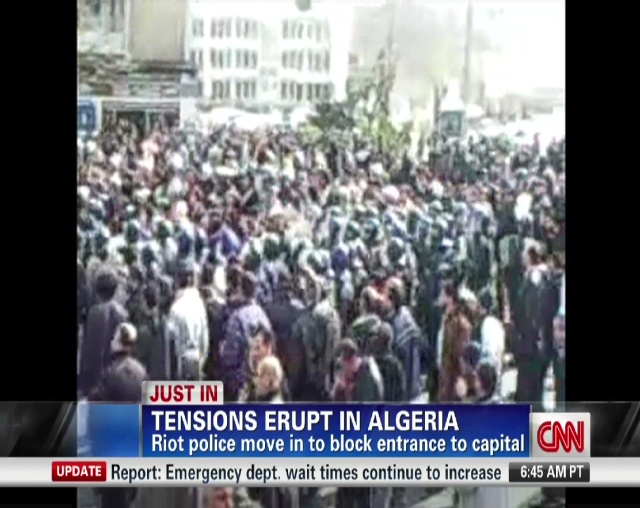 Hundreds of youths have clashed with security forces during protests in the northern Algerian town of Akbou.

Police reportedly used tear gas and batons to drive back crowds protesting over unemployment. About 30 people, most of them protesters, were hurt.

In January Algeria was the first in a string of countries to see street protests, as people rallied against high food prices and unemployment.

Several people were killed as unrest spread across the country.

The sporadic protests have been continuing since early January.

On Saturday, thousands of people took part in protests in the capital, Algiers, demanding the resignation of President Abdelaziz Bouteflika, but were dispersed by riot police.

One political activist, Rida Bourda, told BBC Arabic that the demonstrators were met with unreasonable force.

“The youth went to protest. But the only answer the authority gave them was the police,” he said.

“The police started beating them and used tear gas canisters. All the youth wanted was democracy and more freedom.”

Correspondents say the protests are widely seen as drawing on deep frustrations with the ruling elite and a lack of political freedom, as well as more immediate concerns about the cost of living, housing, and jobs.

This entry was posted in resistance and tagged algeria, repression, riot, social tension. Bookmark the permalink.